In yet another effort to convince the American public that God does not exist, American Atheists are putting up billboards again this year during the holiday season.

Good luck with that.

The billboards are arresting.  They contain images of Santa, Jesus, Poseidon and the devil next to such messages as: "37 Million Americans know MYTHS when they see them."  That’s stronger than last year’s version which included: "You Know It's A Myth. This Season, Celebrate Reason."

You’ll have to live in Ohio, New Jersey and Florida to see the new signs, but they are bound to generate some controversy all over the country.  American Atheists Communications Director Blair Scott expects that: "When you question someone's long-held beliefs and doctrine they are going to be immediately offended and be on the defensive: it's a known psychological phenomenon," he told an online publication.

The signs may spur anger, but they just won’t have any effect on belief.

As a friend who read several of my religious history books – which explain the clearly less-than-divine origins of our beliefs and sacred artifacts -- noted, “We need our myths.”

He’s right.  We do: atheists, agnostics and believers alike.  Myths provide a framework for our lives.  They give us a reason to live, a sense of purpose to counter the wrenching realization that there is no reason for life except life itself.

That’s why myths gather around significant people.  Our heroes provide a glimpse of something better, something beyond mundane existence.

Reality never vanishes, even in the most religious mind. Mother Teresa, the Albanian nun who spent her life helping India’s poorest residents of Calcutta, made that clear.  In her writings, she expressed her doubts about God and her Catholic faith, but continued to sacrifice for others.

She was hardly alone. Catholic priests who have attended my Stetson University religious history class have admitted they did not believe in Jesus in any role, but continued in their positions in order to provide service to their parishioners.  I have had rabbis tell me the same thing.

They all realize that religion is a myth, but that myth serves as such a powerful motivating force – hopefully, for the good.  Unfortunately, religion-based wars tell us the direction isn’t always pleasant, but nothing else can produce the self-sacrificing saints like Mother Teresa who dot human history.

Besides, no one really knows whether there’s a god or not.  Religion is based on mythology.  Our images of God are equally flawed, but that doesn’t completely discount the existence of a being (or beings) that affect our lives. 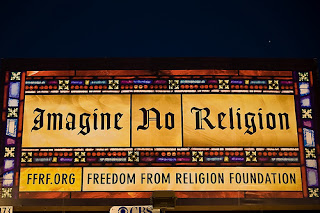 Atheists suffer from the same flaw as true believers: both believe they are completely right and leave no room for alternative ideas.  Unfortunately, we don’t have enough information.  Everyone can’t be right, but they all can be wrong.

As a result, as polls continue to show, more than 90 percent of Americans believe in God.  That’s not likely to change anytime soon.

Top of Form
Bill Lazarus regularly writes about religion and religious history.  He also speaks at various religious organizations throughout Florida.  You can reach him at www.williamplazarus.com.  His books are available on Amazon.com, Kindle, bookstores and via various publishers.