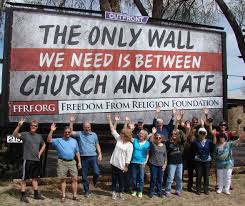 No claimants get me more incensed than religious bigots who insist on imposing their beliefs on everyone else.  Their incessant drumbeat fouls our politics, daily life and international activities.

Then there are the incredibly dense Facebook writers who insist Christians are being persecuted.

One just posted that the U.S. Air Force should be condemned for objecting to a soldier’s intense Christian message on his personal whiteboard.  It didn’t occur to that mental midget that such beliefs could cause dissension among fellow cadets or interfere with the ability of that cadet to be ecumenical in his approach to his duties – an absolute necessity in any military activity.

In fact, all references to religion should be banned in public life.  Belief is private.  It needs to stay there.

The alternative has never been pretty.

Historically, religions have caused untold millions (if not billions) of deaths for centuries.  Pope Francis made that same observation this year as well.  Multiple historians have done the same. Blame it on monotheistic faiths and their insistence their one god can’t tolerate rivals.

Prior to the introduction of monotheistic Judaism in the 7th century B.C.E., no one went to war to impose beliefs.  People then were sure their god(s) fought with them.  If they won, then the losers adopted the new belief.  War was for power, land and money, not religion. The 10 “lost tribes” weren’t lost; survivors mostly assimilated

No group at any time has gone to war to convince others to be atheists.  In contrast, untold numbers have died because someone wanted to impose a monotheistic religion on them.  Jews never had enough power to kill gentiles willy-nilly, but, when they could, they did.  Christians carried the evil technique to a whole new level.

Of course, believers deny that.  To do that, they have to ignore well-documented history.

·         Pagans murdered by Christians after Christianity became the sole religion of the Roman Empire late in the 4th century.  Then Christians turned on each other.  One Roman philosopher asked if there weren’t enough hills for Christians to commit suicide rather than constantly killing each other.
·         “Heretics” wiped out for more than 1500 years by one dominant Christian group or another.

·         Jews killed throughout the centuries in pogroms and other massacres.  Crusaders warmed up for their murderous task by annihilating Jews in Europe en route to the “holy" land.

·         Residents of the Middle East killed by the Crusaders.
·        Civilians wiped out en masse during the 30 Years War.  Whole sections of Europe were denuded of people as Protestants and Catholics fought each other.
·
The many killed during the Inquisition because their belief wasn’t pure enough.
·
The masses of Catholics and Protestants who killed each other starting in the 1400s as rulers shifted alliances. “Bloody” Mary in England is a nice example.
·
Muslim conquerors who offered the sword or conversion to millions whose land they seized. Jewish kings in the 1st century B.C.E., who did the same thing to Samaritans, who were not the proper sect of Judaism.
·
Hindus and Muslims killed each other in India, forcing partition and the deaths of many more in both directions.
\
·         Modern murderers like ISIS and their ilk.

T    That's just scratching the surface.  Think of the many people across 1800 years whose lives have been blighted, shortened or otherwise damaged by religious dictates.  Women have suffered the most, and still endure tremendous hardships because of rules imposed by male-dominated religions 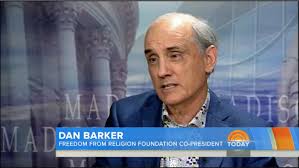 Former evangelist Dan Barker – who used to get (and maybe still does) royalties from gospel songs from his earlier incarnation – and his wife Annie started the Freedom from Religion Foundation in the 1970s.  They were once laughed at and scorned, but their Foundation has expanded over the years, augmented by growing disbelief.

Today, more than 23 percent of Americans eschew religion.  They are members of a growing horde worldwide.  In some areas, religion has disappeared completely.

Believe what you want.  Just keep it to yourself. No one cares.  Just because you believe it doesn’t make it true anyway.  It also doesn’t give you the right to impose a belief on someone else.

Long-time religious historian Bill Lazarus regularly writes about religion and religious history with an occasional foray into American culture.  He holds an ABD in American Studies from Case Western Reserve University.   He also speaks at various religious organizations throughout Florida.  You can reach him at woplazarus@aol.com.  He is the author of the famed Unauthorized Biography of Nostradamus; The Last Testament of Simon Peter; The Gospel Truth: Where Did the Gospel Writers Get Their Information; Noel: The Lore and Tradition of Christmas Carols; and Dummies Guide to Comparative Religion.  His books are available on Amazon.com, Kindle, bookstores and via various publishers.  He can also be followed on Twitter.