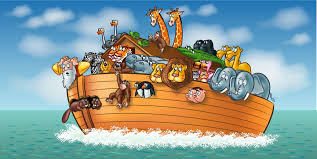 A group of “scholars” on the internet have been busily trying to “prove” that the story of Noah’s Ark really could have been true.  They have been going through incredible mathematical gyrations to show that the number of animals aboard the vessel could have been manageable, since many animals, such as seals and walruses, live much of their lives in water.

The fact that such creatures -- except for animals like whales and dolphins, for example, that have fully adapted to water -- need to rest on dry land apparently never figured in the equations.  After 40 days forced to float in an Earth-covering ocean, they would all be dead.

The “scientists” also figured the size of compartments and calculated how big a boat would have to be to accommodate the animals.

In their haste to “prove” nonsense, however, they missed a few key points.

For starters, the beastly passengers have to be fed.  They don’t line up at buffet tables, such as on a cruise ship.  They typically eat each other.  Obviously, then, Noah and his few companions would have been very busy divvying up food stored on board.

Modern ships have refrigeration.  Noah wouldn’t have enjoyed that luxury.  Sailors just 100 years ago could have told the so-called scholars how long food lasts on a ship.  The navies of the world depended on hardtack and salted meat, almost all of it spoiled and maggot-filled on long sea voyages.

Herbivores also need food.  Let’s see: an elephant eats between 200 to 600 pounds of food a day.   Try keeping that fresh for 40 days. Or the tons also needed for hippos, which live in the water but eat on dry land, as well as rhinos, giraffes, deer and other large critters.

Then there’s a little thing called genetics, initially understood only in the beginning of the 20th century.  The surviving animals would have to mate with each other and their offspring.  The resulting inbreeding would have shown up in serious illnesses and genetic weaknesses, just as it has in humans who restrict their genetic choices.

On top of that, there’s the obvious problem of distance.  Are the scientists suggesting that two kangaroos, for example, calmly hopped across open water from Australia, through Asia to the Middle East to catch a ride on the Ark and then, when the boat came to rest, hopped back?  Where are the bones left by animals that failed to complete similar journeys?  Sloths probably wouldn’t get very far anyway.

Did Noah make stops en route as animals lined up at stations? The Bible missed that tidbit.

To make the whole scenario even more ridiculous, the would-be scholars somehow ignored whole sections of existing life that would have been destroyed by such a flood, including insects, plants and bacteria.  Few species of insects live in water.  Yet, there are more of them than any other creatures on Earth.  Somehow, the millions of species of beetles, ants, worms and fleas etc. managed to stay alive amid the flood waters.

Then, too, plants endured.  Few of them can live in water full time, especially in dry areas like deserts.  As any home gardener knows, too much watering kills plants.  Think what a 40-day deluge would do.  Bacteria, too, overcame the obvious saturation.

To resolve such difficulties, “scholars” working on “proving” the existence of Noah’s Ark proposed that the creatures somehow went to a period of suspended animation.  Why not just say God can do anything?  Great, He could kill everyone without a flood. Then, there would be no reason to bother with widespread hibernation or other absurd solutions.  To claim that, however, would require ignoring everything from biology to archaeology.

Not that it matters.  Such “scholars” are motivated solely by their beliefs.  Science then only becomes a roadblock to be avoided, not an arrow providing direction.

Real scientists don’t have that difficulty.  They go where the research takes them.  If it contradicts beliefs, so be it.

That’s what scares the faithful.  Science, now armed with an incredible array of instruments, has overwhelmed ancient religions born in distant generations when knowledge was limited to the weak human senses.  That’s the real flood that believers are trying to cope with.  They can’t, any more than they can prove that Noah’s Ark actually existed.

Posted by William P. Lazarus at 9:37 AM No comments: