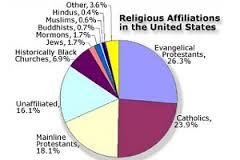 What in God’s name is going on?

Some atheists and agnostics believe in God.  Many so-called religious people do not.  Those are the surprising results of the September 2014 Pew’s Religious Landscape survey.

According to published results, six percent of atheists said they were “absolutely certain” that God exists.  Almost 18 percent of agnostics agreed with them.  Meanwhile, on the other side, most Reform Jews (the most liberal of the Jewish sects) and Unitarian Universalists don’t know if there’s a God or don’t believe in the existence of a deity.

At the same time, despite exhortations by religious leaders, only about half of Catholics believe that God cares about them on a personal level. They were joined by members of such prominent Protestant sects as Presbyterian USA, American Baptist, and Anglican.  More than half of Orthodox Jews don’t believe in a personal God either.  Neither do Muslims.

Naturally, there are self-identifying agnostics and atheists who do.

Of course, the vast bulk of Americans believes there is a God, but the numbers are dwindling.  Overall, only 71 percent of those surveyed absolutely believe there is a God.  That has declined by 20 percentage points in a matter of a few decades.

The numbers correspond to the findings in the same survey about the Bible being the exact word of God.  Only 33 percent of Americans agree with the statement.  In contrast, 28 percent believe the Bible was written by humans.

In some conservative sects, like Jehovah Witnesses, almost as many (45 percent) believe the Bible is a human book as believe it is divine (48 percent).  Some 27 percent of Catholics reject the idea that the book came from God.  Overall, 44 percent of all Christians answered yes to the statement that the Bible was written by men and is not the word of God.

The Pew study also reflects what’s happening in the elections where people who think religion should have a bigger role to play in American life are pitted against those who disagree.  The Pew Study found that the less-religious are winning.

The Democratic Party, which is seen as the political group less bound to religion, got 47 percent of the vote – either people saw themselves as Democratic or leaned that way.  Republicans garnered 36 percent.

Whether or not the survey reflects what will happen after the upcoming election remains to be seen.

One thing is certain: Religion is losing its grip on Americans.  More than 72 percent of Americans 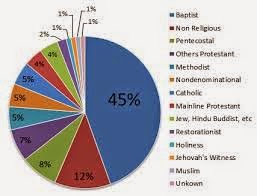 now think religion is drifting away from daily life.  That’s up 5 percent and represents the highest percentage ever recorded in the annual survey.

As a result, Americans are torn between wanting the morals and ethics touted by religion and the freedom of self-expression.  They can’t decide if they want their elected officials to be religious or not religious, whether or not churches should endorse candidates and a raft of related issues.

These kinds of differences reflect the slow fracturing of what had been a solid religious front, the groundswell that Republican leaders have largely kowtowed to.  The Moral Majority is fraying at the edges under the constant friction of increased knowledge about the universe, shared ideas across the religious spectrum and international communication.

Children who grew up believing in the absolute truth of their inherited religious beliefs are being confronted of the reality of biblical research, the multiplicity of religious beliefs and shifting societal attitudes.  Throw in the uncontrolled epidemic like Ebola, and even confident religious folks begin to doubt their beliefs.

In turn, the stranglehold religion has had on American life is slowly easing.  In time, it may completely disappear.  That has happened before elsewhere.

Judaism has been on the verge of disappearing several times in its history and was only saved because some ruler decided to attack the faith.  Then, Jews rallied to defend it.  Left alone, Jews – like all people – assimilate into the general population.

At the same time, religions have an expiration date.  Prominent faiths only last so long before something else comes along to replace them.  The pagan faiths of the Romans and Greeks, for example, were dying about 2,000 years ago when Christian was founded.  Zoroastrian was once the principle faith of the Persian Empire.  Seen any Zoroastrians lately?

Today’s religions seem to be following the same path.

If self-proclaimed atheists can believe in God, then anything is possible. 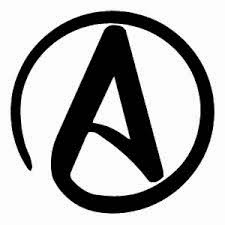 In a recent letter to the editor to the editor in the Daytona Beach News-Journal, a writer said that atheists are responsible for killing millions of people.  He cited China and Russia as examples.

He is right in one thing: Russia officially espoused atheism.  China still does, along with other countries that were not included in the letter.  However, the writer was wrong about that being the cause of deaths in their countries.  They were simply rejecting the Western religions.  They had their own gods.

In China, that deity was Mao Zedong, the long-time chairman of the Communist Party there.  He didn’t hand out little red books to promote literacy.  He didn’t post huge images of himself on walls to enhance the vista.  He was trying and succeeding in creating a cult with himself as the central focus of devotion.

His Great Leap Forward and other dismal efforts to boost the country led to the deaths of millions, but not a single convert to atheism.  The Chinese were forced to bow to Mao instead.

In Communist Russia, they had three gods: Karl Marx, the father; Vladimir Lenin, the son; and Stalin, the holy ghoul.  All three were properly worshiped.  Lenin was even embalmed and placed on display so the pious could reverently file by regularly.  The Five-Year-Plan that led to the starvation of millions there did not contain a single word about religion or the need not to believe in a god.

Both countries definitely punished those who maintained the old faiths.  They just wanted their new human gods substituted for Buddha and Jesus.

They are not the only humans elevated to the heavens.  Alexander the Great tried that trick.  So did Julius Caesar, who was turned into a god by vote of the Roman Senate.  Ramses the Great of Egypt didn't build all those statues of himself to give artisans something to do when the Nile was flooding the landscape.

More recently, Adolf Hitler got a memorable nickname, the Fuhrer, and set out on a murderous run.  He didn’t kill anyone to make them atheist.  He killed them because they weren’t Aryan.

Benita Mussolini in Italy became “El Duce.”  He, too, pretended to be a god, and thousands died while he maintained that false front.

Both Hitler and Mussolini were raised Catholic and reached accords with the Roman Catholic Church.  They didn't espouse atheism either.  Both evoked God regularly and insisted they were doing His work.  They just wanted the devotion of millions instead of it being given to the Vatican.

There's no requirement a megalomaniac trying to join the divine pantheon has to be Christian.  Saddam Hussein of Iraq and Hosni Mubarak of Egypt, both Muslim, did not hesitate to create cults around themselves, elevating their status far beyond those of mortal men.  Bashar al-Assad of Syria is doing that right now.

These men didn’t plaster their cities with their images as a way to improve the eyesight of their residents.

The list could go on:  Just pick a dictator from any country yesterday or day.  None of them cared a whit about religion, regardless of the beliefs they learned as a child.  They wanted (and still do) power and money, the two top ego-driven aspects of any religion.

None of them launched a war to promote atheism.  Religion did: the 30 Years War killed until hundreds of thousands solely because of religious differences.  Then there were the Crusades, which are continuing with ISIS these days in northern Iraq. There is virtually no end to the number of religion-fuel murderous binges.

Those folks, like the Taliban in Afghanistan, want to force their faith on others.  No atheist ever tried that, but then, modern Muslims have plenty of history to draw on: the Muslim forces that swept across the Mediterranean world in the 7th century after the death of the Prophet Muhammad were trying to impose their religious beliefs.

No atheist army has ever existed or ever imitated that blood-thirsty approach to faith.
In fact, no atheist ever has killed anyone in the name of no god.  On the other hand, virtually every major religion has killed on behalf of its deity.

The author of the letter preferred to perpetuate a fairy tale about atheists, an approach which, considering the stories told about his invisible deity, fits perfectly into his wheelhouse.