Recently, a group of local residents descended on the Volusia County (Fla.) School Board to protest use of a history book, which they insist, promotes Islam.  So many people showed up the first time the issue was to be debated that the school board cancelled the session over “security” fears.  That only infuriated opponents even more, who labeled the offending chapter a “love fest” that ignores other religions and real “truth” about Islam.

The protesters shouldn’t have stopped with the Islamic chapter.  They should have considered all parts of the book, which, like most American histories, ignores the facts and softens all the lumps in our past to create homogenized pap.

Take Thanksgiving for example.  That’s the next major holiday on the calendar.  Schoolchildren learn that the Puritans fled England for religious freedom, ended up in Massachusetts instead of the intended Virginia and survived with the help of a friendly Indian, Squanto.  The next year, the cheerful folks dressed in somber black-and-white clothing hosted a great feast to thank God for their survival in the harsh winter and invited the Indians.

Yes, the Puritans left England to seek religious freedom, but only for themselves.  They considered the Indians pagan savages.  They resented and opposed anyone who came to Massachusetts with different views, punishing and even killing Quakers and members of other Protestant sects.

One of their prominent ministers, Roger Williams, ran afoul of their narrow, bigoted views and was forced to leave Massachusetts in the winter.  Only the pagan Indians helped him survive.   Deeply moved by their kindness, Williams started a colony now called Rhode Island, and placed in the charter the right of religious freedom.

Meanwhile, the good Puritans busily kept killing the natives, either with diseases carried in their clothing and in their animals or with their guns.

Squanto, who did help them, had been kidnapped in 1607 as boy and taken back to England.  He learned English there, came back to the New World, was captured by a British slave trader and sold to the Spanish.  Eventually, he managed to get back to England and wangled a trip back to Massachusetts.  He finally got home in 1619, only to find that European diseases had left him as the sole survivor.

Moreover, the first Thanksgiving didn’t take place after the Puritans survived their first winter in 1620.  It occurred in 1637 to thank God following the successful massacre of an estimated 700 unprepared and defenseless native men, women and children in a nearby Pequot village.  The Puritans had been outraged after finding a dead settler in his boat.  They blamed the Pequot and went off on a murderous spree.

The next day, William Bradford, governor of the Massachusetts Bay Colony, issued a proclamation calling for:

This day forth shall be a day of celebration and thanksgiving for subduing the Pequot.

Besides, the “uncivilized” natives already held an annual Thanksgiving, a custom that predated the Puritan meal by hundreds of years.  Today, Native Americans understandably call our Thanksgiving a “national day of mourning.”

That’s the kind of history American children never study.  They’ll learn even less if the protesters have their way.  By raising objections to an already sanitized text, all they are doing is revealing their bigotry.  The only cure for that scourge is knowledge.

Here’s one fact that the protesters then need to learn:  the history text books in question already have seven chapters on Christianity and Judaism, and only one on Islam.

Posted by William P. Lazarus at 6:48 AM No comments:

The Mystery of Christmas 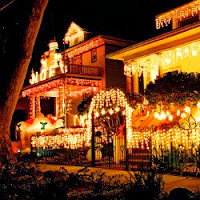 It isn’t even Thanksgiving, and Christmas carols are already floating through the air.  In television ads, gifts pile up under a tree covered with decorations.  A jolly, bearded elf waves merrily.  Streets are starting to fill up with images of angels.  Homes will soon be ablaze with lights along with the joyous sounds of families gathering to enjoy the season.

They would have found the hoopla surrounding the holiday unfathomable.  Christmas wasn't even celebrated with any known festivities for at least 200 years after Jesus was born. Even the term “Christmas,” so familiar to us, was unknown then. Christmas does not show up on the list of Christian festivals described late in the second century by such men as Irenaeus -- who was the first to list the books now in the New Testament -- or Tertullian, one of the great scholars of that era.

Origen, the most prolific writer among the early Church hierarchy, didn't like the idea of a birthday party at all.  He noted that the birthdays of Moses, Abraham and prophets didn't warrant a single cake or candles.  In the holy texts, he added scornfully, only sinners celebrate their birthdays.

Arnobius, another great leader of that day, satirically commented on the "birthday of the gods."  He may have been thinking of Roman emperors who ordered annual feasts on their birthdays.

When the Church finally decided to have a holiday to mark Jesus’ nativity, the question was: what day? In 200 A.D., the holiday finally earned an official mention.  Clement of Alexandria said then that, in Egypt, the day chosen for the big occasion was May 20.  He said the theologians thought the fifth month of their calendar corresponded to the ninth month of the calendar at the time when Jesus lived.

Other dates suggested for Jesus' birthday included April 19 and April 20.  March 28 earned a vote because that was the day, supposedly, when the sun was created.  A later study found that
Christ's birthday has been earnestly placed on virtually every day of the year, each claim supported by ample evidence or wise conjecture.

In reality, no one knew exactly when Jesus was born.  At the time of his nativity, no one thought to record the date.

December reportedly was given the nod by bishops at the famed Nicea Council in 325.  That view didn’t have much impact, based on the welter of proposed dates that followed that significant clerical session.

In 350, supposedly, Pope Julius I decided to resolve any lingering debates.  According to extant correspondence, he acted at the request of Cyril of Jerusalem, a famed priest who was upset that his clergy had to march into the Holy City twice for separate holidays.  Based on this account, Cyril asked Julius to declare that Christ was born on December 25, relying on census documents supposedly brought to Rome by Titus, the Roman general who destroyed the Temple in 70 AD.  If the story is true -- and the documents recounting it may have been forged -- Cyril still hadn't changed the date six years after Julius died.

The Pontiff certainly didn't convince many people.  In Jerusalem, Silvia of Etheria could write about the celebration she witnessed in 385, which lasted 40 days and started January 6.  She also said the major Christian religious festivals were only Easter and Epiphany.

In fact, Jerusalem didn't succumb to the December 25 designation until at least 300 years later.  Instead, commemorations of Jewish King David and James the Apostle were held annually on December 25.

Antioch, another important early Christian stronghold, opted to join the December 25 bandwagon, but not until as late as 386 or 387.   St. John Chrysostom, the Church leader there, attempted to hold one celebration rather than have it scattered around the calendar.  He wrote that part of the community had been celebrating Christmas on December 25 for at least a decade.  Ironically, he faced conservatives who opposed the move.

In Constantinople, Christmas was held on January 6, conforming to Chrysostom's view.  In Hispanic countries today, the big day is still January 6, commemorating when the traveling magi reportedly arrived in Bethlehem to worship baby Jesus.

In Rome, December 25 also held sway.  Early documents from 354 contain a calendar listing claiming Christ was born that day.  Naturally, given the carelessness associated with the handling of the texts, there's some question whether later pious insertions helped "confirm" the exact date.

By the late fourth century, the diocese in Constantinople, capital of the eastern Roman Empire and residence of the emperor, supported December 25.  That ended the argument.

The holiday quickly took on pagan attributes.  That didn't sit well with Christian authorities. In 425, they banned circus games.  About 100 years later, they ordered all work to stop on December 25.  A few years after that, they extended the holiday and matched the old 12-day Egyptian version, and added a fast.  None of that choked off the merrymaking.  Around 1000 A.D., some inventive leader fabricated the "Laws of King Cnut," which mandated a fast from December 25 to January 6.

No doubt, this austere approach made Christians hungry for some real holiday excitement.

After Christmas festivities returned in the Middle Ages, Puritans banned the celebration of the holiday first in England and then in their new home in America.  They were upset because Christmas does not appear in the Bible, which they considered the final word on such holidays.  Some Christian sects today refuse to acknowledge Christmas for that reason.  Some Catholics still do not begin to trim their Christmas trees until Christmas Eve to maintain the sanctity of the holiday.

Most others went about enjoying the season. A Terre Haute (Indiana) newspaper editor in 1855 commented on the frivolity. He was bemused by the "gambol," gift exchanges, and the person of "Santa Clause" who seemed to dominate the holiday. He wondered if such behavior was the proper way of celebrating the birth of Christ. In a telling comment, he noted that it was probably already too late to change things, as the trend was already well established.

He could say the same thing these days.  With no Church Fathers to provide opposition, Christmas has crept far beyond a single day in December to cast a red-and-green shadow over the last two months of the year.