Anti-Semitism Reveals a Christian Past Updated

A variety of news agencies are reporting that episodes of anti-Semitism have risen around the world. Fringe political leaders in Europe have attacked Jews verbally. Recently, a Nazi flag was found flying in a Wyoming public park at the same time avowed anti-Semites are openly running for office.

Then, this week, 11 people were killed by an avowed anti-Semite in Pittsburgh, a more graphic demonstration of the kind of hate festering in this country.

In North Carolina, for example, white supremacist Russell Walker, a Republican candidate for the state house of representatives, used his webpage to claim (sic) “the jews are NOT semitic they are satanic as they all descend from Satan.”

In Illinois, American Nazi Party member and Republican Arthur Jones is running for Congress and posted on his website that the “idea that six million Jews, were killed by the National Socialist government of Germany, in World War II, is the biggest, blackest lie in history.”  In California, John Fitzgerald, representing the Republicans in a run for a state house seat, claimed that the Holocaust is a lie and that Jews were behind the slave trade of the 1700-1800s.  In Wisconsin, another openly anti-Semite, Paul Nehlen, is running as a Republican for the U.S. House seat being vacated by Paul Ryan.

What is going on?

Sadly, nothing new.  Anti-Semitism has been an integral part of Western civilization since it was invented by Christians some 1600 years ago.  With a president openly espousing bigotry, anti-Semites are simply more overt, reprising their counterparts in the Middle Ages and the 1930s.

Prior to the birth of Christianity, anti-Semitism was unknown.  Jews may or may not have been popular, but that had nothing to do with their religion.  As residents of a small country in between major powers, Jews often found themselves in conflict with neighboring lands  Their beliefs didn’t matter at all.

And they were different.  They believed in one god at a time when the rest of the world had countless gods or, as in Buddhism, none.  They had many rules and regulations that explained how to worship that god they called Yahweh.  Romans shrugged and added Yahweh to their pantheon along with multiple gods from other cultures.

Romans also catered to Jews eccentricities by allowing them to pray “for” the emperor rather than “to.”  They handed out free food to poor Jews on a Sunday rather than on the Jewish sabbath, Saturday.

Actually, Jews and those who liked their moral and ethical teachings (called God-fearers) represented the largest single faith in the Roman Empire, an estimated 7 to 10 percent of the population.

Romans didn’t dislike Jews for their religious beliefs but weren’t happy with them for rebelling three times in the first and early second centuries.

Then the Christians came along.  Romans didn’t like them either because they were just as adamant that there was only one god and refused to accept that Roman gods existed.
Romans thought the deities protected them and had to be catered to.  Failure to do so meant danger to the country.

Jews were not punished for their reluctance to acknowledge Jupiter and his cohorts because they had an ancient history and so were “grandfathered” in.  Christians were new and didn’t have that protection. They were persecuted (not as often as decried by Christian leaders or as long -- an estimated 13 years across three centuries) and quickly cried for religious freedom.  That fervent request vanished as soon as Christianity was declared the sole state religion late in the 4th century.

Then, Christians attacked every other religion, but their special animosity was directed against Jews.  Early followers of Jesus were all Jewish as were the first 15 popes.  However, when the beliefs finally divided around 100 C.E., Christians believed that Jews had been the “chosen people,” but that designation had transferred to the Christians.  Yet, there were still Jews.

Once Christianity took control, anti-Semitism was born. Christian cultures quickly marginalized Jews, eventually banning them from many European countries, forcing them into detested professions like tax-collecting and money-lending, requiring them to wear special markings and making them live in isolated communities.  Jews were victims of pogroms and assaults, confiscation of property and kidnapping of their children as well as such absurdities as the “blood libel” that still stains human conscience.

Yet, Jews endured, despite the hatred reinforced by Church leaders determined to harass and belittle a small cadre of people who refused to accept Christian “truths.”  Anti-Semitism was nothing more than a brutal way of demeaning another religion for the sin of surviving in a Christian society.

The role of the Church in asserting and maintaining anti-Semitism was amply documented in a 1960s study by the Sanford University. 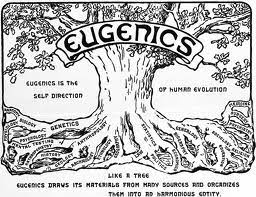 Such hatred was further abetted by a pseudo-science called eugenics, which was at the heart of the Nazi claims of superiority.  Conceived in the mid-1800s by an English relative of Charles Darwin, eugenics argued that some people had good genes.  Others were defective.  So, everything had to be done to prevent the continuation of bad genes.  To Nazis, Jews had the poor genetics.  In this country, racists naturally thought African-Americans did.

Only genetic research after World War II proved the concept was false.  Some genes are defective, but they aren’t the property of a single group.  We all have them.  As a result, mixing DNA across ethnic boundaries results in stronger people, not defective ones.  That’s because a defective gene has to match up with a similar one to affect someone.  If only one contributor has a defective gene, it never affects the baby.

At the same time, scholars worldwide have documented the reality of the Holocaust, the lack of Jewish involvement in the slave trade and other facts that completely belie claims by anti-Semites.  Jews don’t control banking or have even a modest share of any industry except clothing and jewelry.

Still, anti-Semitism thrives.  Like any form of bigotry and irrational hatred, it is passed along through generations as described in Oscar Hammerstein’s lyrics from South Pacific:

In a recent news story, a young Christian woman in Germany visited a gathering of Jewish teens, listened to them explain their religion and told reporters that she couldn’t understand why anyone would hate them.  Anti-Semitism to her made no sense.

It doesn’t.  Neither does racism or any other form of bigotry.

Humans are all the same.  Our only difference is gender.  And even there the differences are minimal.

Unfortunately, as the spate of anti-Semitic candidates and actions demonstrates, some people prefer to create divisions when none exist.  They are not alone.  Each of the hate-spreading candidates are on the ballot because they finished first or second in their primaries or ran unopposed.  People voted for them despite their lies.

Sadly, irrational hated is not limited to the few who venture into the spotlight and hasn't been for centuries.

Long-time religious historian Bill Lazarus regularly writes about religion and religious history with an occasional foray into American culture.  He holds an ABD in American Studies from Case Western Reserve University.   He also speaks at various religious organizations throughout Florida.  You can reach him at www.williamplazarus.net.  He is the author of the famed Unauthorized Biography of Nostradamus; The Last Testament of Simon Peter; The Gospel Truth: Where Did the Gospel Writers Get Their Information; Noel: The Lore and Tradition of Christmas Carols; and Dummies Guide to Comparative Religion.  A recent book, Passover in Prison, which details abuse of Jewish inmates in American prisons.  His books are available on Amazon.com, Kindle, bookstores and via various publishers.  He can also be followed on Twitter.

Posted by William P. Lazarus at 2:55 PM No comments: