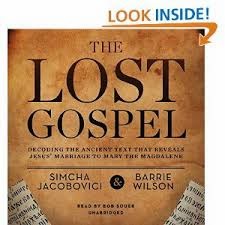 Just in time to gouge purses for the holiday season, a recently published book claims that Jesus was married to Mary Magdalene and that the Roman Catholic Church has hidden that “fact.”  The authors, Simcha Jacobovici and Dr. Barrie Wilson, have good credentials and are convinced they have a solid argument. Jacobovici is an award-winning filmmaker; Wilson is a professor of humanities and religious studies at York University,

That and historical research.

Let’s look at the “evidence” as outlined in his on-line article touting the book, The Lost Gospel: Decoding the Ancient Text that Reveals Jesus' Marriage to Mary Magdalene.


First, Jacobovici claims that the Gospels never say Jesus was celibate.  No kidding.  They also don’t say he was married either.  His personal life was of little interest to the writers, who focused more on imagining his ministry and creating  quotes.

Then, Jacobovici cites the Gospels’ claim that Mary Magdalene anointed Jesus’ body after death.  He says that only a wife would do that.  However, as he and Wilson know fully well, the texts are not an accurate depiction of Jesus’ life.  They are simply the beliefs of the authors, a pastiche of quotes from various sources, Old Testament tales and the like.  There’s no proof Jesus was crucified or anointed or anything.

Citing them as a source is like arguing about the composition of the moon by examining tea leaves in the bottom of a cup.

Jacobovici then turns to the Gnostic gospels, texts written by a multifaceted Greek sect that adopted Jesus as a messenger from God.  They insist Jesus was married, but have no more factual validity than the New Testanent.   All of these books were written decades after Jesus died and had already passed into myth.


Having failed miserably on that claim, Jacobovici reports that “the Gospels call Jesus ‘Rabbi’ (Matthew 26:49, Mark 10:51, John 20:16). Rabbis, then as now, are married. If Jesus wasn't married, someone would have noticed.”  Actually, someone would have noticed if Jesus was called a rabbi, since the term was not used as a title of respect until after the destruction of the Temple in 70 C.E., about 40 years after Jesus died.  The use of the term only indicates that the books were written following the destruction of the Temple, when the great sages, known by the title of “Father,” had been annihilated.

Besides, Matthew, Mark and John had no idea how anyone addressed Jesus and simply used a title they were familiar with.  A more plausible option is “master.”

Next, Jacobovici notes that Paul, Christianity’s greatest advocate, advocated celibacy because he came from Tarsus, which had the annual celebration of Attis.  That Greek god was the “good shepherd,” who cut off his tentacles in his wedding night.

From that fact, Jacobovici add that “had Jesus been celibate, Paul would certainly have invoked him as an example when arguing for celibacy. But he doesn't. Never once does Paul argue that Christians should be celibate, because Jesus was celibate. Not once!”

That’s no shock.  Paul does not quote Jesus saying anything.  Not once!   Paul’s vision of Jesus is clearly colored by his awareness of Attis, but Paul has his own ideas about what the his version of Judaism should constitute.  He never uses a quote attributed to Jesus as an example in any of his letters.  Moreover, despite the book’s claims, Paul could not have been Jewish, but was probably a God-fearer, one of a multitude who followed Jewish customs without formally joining the religion.

Accepting the Jewish Jesus as his deity, Paul convinced himself that he would be “saved” with the Jews when the world ended, something he felt incorrectly would be occurring post haste.

Jacobovici then cites a tomb uncovered in Talpiot, just outside of Jerusalem.  In it, archaeologists found 10 limestone coffins (known technically as ossuaries.)  Jacobovici eventually produced a film on the discovery in which he claimed the ossuaries represent the family of Jesus.  Since one was marked by the words “Joshua, son of Jesus,” he insists that “proves” the marriage.

No it doesn’t.  It proves only that a group of people were buried together.  All of the names on the coffins were common in those days.  He knows fully well how easy it is to jump to conclusions, something Christians are apt to do whenever anything is found that might remotely connect to Jesus.  Still, it’s a pretty big leap.

This brings us to the authors’ final point, which is based on a "Lost Gospel."  Cited in the new book’s title, the ancient text dates from the 6th century.  Jacobovici and Wilson decided it preserved traditions from the first century, 500 years earlier.  Maybe, but traditions are not fact.  For example, traditionally, Jews were slaves in Egypt and then escaped under Moses.  Historically, not a shred of evidence has ever turned up to support that scenario.  Everything found so far contradicts it.

There are also many “lost gospels” anyway, not just this one. The New Testament contains only four books deemed orthodox enough.  The others were discarded, but some have been found, including gospels attributed to almost every disciple.

Besides, the old text cited by the authors does not name Jesus, but focuses on Joseph and his wife Aseneth. Jacobovici claims that "Joseph was a stand-in for Jesus” in the community the text was written.  Or not.  After all, many Josephs show up in the Bible.  Jacobovici makes the connection between Joseph and Jesus because of an image of a cross next to Joseph’s name.  However, Joseph of Arimathea is part of the Jesus story and associated with the cross, too.

The authors continue on their merry way by claiming that, in the Lost Gospel, Aseneth is described as living in a tower, which is a “migdal.”  They conflate migdal to “Magdalena,” insisting that Mary Magdalena means “Mary the tower lady.” Nonsense.  Magdala was a thriving city in Jesus’ day, and people were identified by their hometown.  That’s why there’s a Jesus of Nazareth instead of Jesus the preacher or some other option.  Mary Magdalena means “Mary from Magdala.”

Jacobovici concludes that “if our historical sleuthing is correct, this text is a Gospel before the Gospels and we can finally return Jesus to the historical context from which Paul removed him.”

And if it’s not correct?  The book becomes just more evidence of how some historian and his shill will do anything to promote themselves and their half-baked ideas.

By the way, Jesus may have been married.  However, this book and the forthcoming Discovery Science movie based on it are definitely not proof of that.

You can enroll in his on-line class, Comparative Religion for Dummies, at http://www.udemy.com/comparative-religion-for-dummies/?promote=1
Posted by William P. Lazarus at 8:21 AM