The Devil Is Good for Business 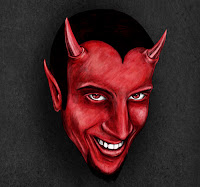 Based on recent surveys, God may be slowly disappearing from American life, but the Devil is making a comeback.  Several centuries after being discredited in Salem, Satan has again wormed his way into public consciousness.

As a result, the demand for exorcists has climbed, too.  After all, someone has to step in to combat Mr. Scratch.  For example, the number of exorcists in Poland has jumped from 4 to more than 120 in just a few years.  In fact, the Poles now have a monthly magazine devoted to exorcism.

Americans don’t have a magazine, but do have more exorcists now than ever, according to a published report.

Leading politicians have chimed in, too.  Rick Santorum, a former Republican presidential candidate, told one audience, “Satan [has been] attacking the great institutions of America, using those great vices of pride, vanity and sensuality as the root to attack all of the strong plants that [have] so deeply rooted in the American tradition.”

Lucifer, Santorum insisted, apparently without being aware of the irony of his own role, was planning to attack politics.

The former U.S. senator is not the only person to recognize Old Nick’s presence.  An estimated 60 percent of Americans, according to a 2009 study, believe in Belial.  That’s an increase from 1990 when only 55 percent of Americans professed that belief.  At the rate, the Evil One is garnering attention, he might soon surpass God in the number of believers.

A leading Polish priest had an answer for the phenomenal popularity of Beelzebub: economics.  The fall of the communistic rule of Poland opened the doors for entrepreneurs, explained Father Aleksander Posacki, who was identified as a "leading demonologist and exorcist."  He added, "Capitalism creates more opportunities to do business in the area of occultism.”

That makes sense.  The same people who invented a need for various unnecessary products, such as antiperspirants, are now creating a need for a Prince of Darkness.

The band KISS understands that logic.  Supposedly, the initials stand for Knights in Satan’s Service.  The letters actually don’t represent anything.  However, band leader Gene Simmons never corrected the misconception because, he  said, “it was good press.”

Even disbelief in El Diablo can create a market.  Dr. Deepak Chopra knows that angle.  He’s written several books on spirituality while rejecting Old Harry’s presence.  "My position is that we have a huge problem with what people call evil in the world, and they need a good rational explanation and not an irrational mythical explanation," he said.

In a 2009 televised debate about the existence of Lucifer, Chopra added that "healthy people do not have any need for Satan. Healthy people need to confront their own issues, understand themselves and move towards the direction of compassion, creativity, understanding, context, insight, inspiration, revelation and understanding that we are part of an ineffable mystery. …So I would say be done with Satan and confront your own issues."

In addition, Chopra probably came closest to the reality that the Polish priest recognized: the Prince of Darkness exists to provide an economic boost.

"Unfortunately, there are religious institutions that have actually idealized guilt and shame and made it into a virtue," Chopra said. "They have created institutions around guilt and sin and shame and disgust with our own self. And when we obsess over these things and we collectively create this obsession then we project it out there as this mythical figure that we call Satan."

Think of Satan as the ancient counterpart of the AFLAC duck or the Geico gecko.  It’s a marketing tool.  Without an imaginary Wicked One to kick around, Christianity would be out of business.