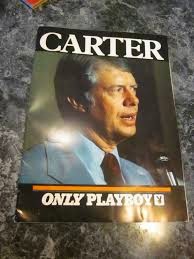 Ever since Democratic Presidential candidate Jimmy Carter decided to discuss his religious beliefs openly in a Playboy magazine interview back in 1976, religion has played a significant role in American politics.  That’s not to say it was hidden before.  However, there are not many examples of religion worming its way into the political process prior to Carter.

Democrat Al Smith in 1928 was defeated in part by his religious affiliation. Democrat John Kennedy in 1960 had to defend himself against charges that he would kowtow to the Pope because of his religion.  Back in 1884, Republican James Blaine lost the presidential election after a supporter said, “We are Republicans, and don't propose to leave our party and identify ourselves with the party whose antecedents have been rum, Romanism, and rebellion. We are loyal to our flag.”  The term “Romanism” was a slander against Catholics, who turned to Democrat Grover Cleveland.

Nevertheless, most candidates avoided discussion of religion.  Republican Abraham Lincoln, the most beloved of our presidents, was criticized for shunning regular worship and ignored requests to put his bedrock beliefs into the public forum.  George Washington and Thomas Jefferson were deists, despite being affiliated with churches.  John Adams was essentially an atheist.  None of that made any difference in their quests to be president.  Good luck trying to guess the religion of Theodore Roosevelt, Andrew Jackson or any other president prior to Carter.

That’s all different today.  The media pries into religious status of each candidate, checks on the clergy at whatever church a candidate belongs to and peppers news conferences with questions about piety.

As a result, quotes focused on religious beliefs are already circulating more than a year before the 2016 election.  Here are what most of the current candidates – announced or expected to announce – have to say about religion in American life.  I have listed them without party affiliation or alphabetical order to avoid being accused of bias.  I’ve also added comments when a politician's statement reflects historical misunderstandings.

Lincoln Chafee (Episcopalian)
Separation of church and state is an important constitutional principle.

Joe Biden (Catholic)
My religion defines who I am. And I’ve been a practicing Catholic my whole life… With regard to abortion, I accept my church’s position on abortion as a — what we call de fide doctrine. Life begins at conception. That’s the Church’s judgment. I accept it in my personal life. But I refuse to impose it on equally devout Christians and Muslims and Jews and — I just refuse to impose that on others.

Rand Paul (Presbyterian)
The First Amendment says keep government out of religion. It doesn’t say keep religion out of government.  So, you do have a role and a place here.
Note:  The Supreme Court has disagreed with the claim in multiple decisions.  That’s why monuments to the 10 Commandments were removed from courthouses, to cite one example.


Bernie Saunders (Jewish)
Note: I could find no comments directly related to this topic, but he is typically liberal in his views.

Martin O’Malley (Catholic)
I learned … to search for Christ in the faces of others including, and especially, the faces of the poor, the faces of the homeless men who lined up for a meal every morning alongside the foundations of this church … I learned … to recognize and confront the enemy within – the original sin of our own culture and environment that would have us think less of people who – because of race, or class, or place – are not like us … And I learned that it is not enough to have faith, you must also have the courage to risk action on that faith, to risk failure upon that faith: the faith that one person can make a difference and that each of us must try.

James Webb (Nondenominational Christian)
Note: I could find no comments directly related to this topic, but he is typically conservative in his views.

Elizabeth Warren (Methodist)
I grew up in a Methodist church and I was a Sunday school teacher when we lived back in Texas. When I was making the decision whether to get into (the) Senate race, one of the important touch points for me was to read my Bible. And it’s Matthew 25:40, you know the passage? For me, that passage is the heart of what I believe. Because what it says is “Inasmuch as ye have done it unto one of these the least of these my bretheren. ...” (I still use the King James version, it’s beautiful).
It says three things: it says there is God in ... the hungry, the poor, the stranger, there is God in each of us. Because. Remember, it says “you did it unto me.” And that’s saying God was in, God is in, the poor, the thirsty, the stranger.


Ted Cruz (Catholic)
This nation was founded by men and women fleeing religious oppression and coming here seeking the freedom to seek out our lord God almighty with all of our hearts, minds and souls, free of the government getting in the way.

Note:  Cruz is incorrect.  The first English settlers came here in 1607 to make money and settled in Virginia.  The second group came for religious reasons, set up camp in Massachusetts in 1620 and created a rigid society that followed one set of beliefs.  They ostracized and/or killed dissenters.  In fact, they wanted government to control religious belief, as did the later Virginians until James Madison in the late 1770s pointed out that a future government could impose a different belief.  Freedom of religion was born in Providence, Rhode Island, which was founded by The Rev. Roger Williams after being ousted from Massachusetts.

More Cruz comments:
We understand that our rights come not from a king or queen, not from government, but from The Lord God Almighty. Today there are great challenges facing our nation, but if America is going to continue to stand strong, we must first be on our knees.

Our form of government has no sense unless it is founded in a deeply felt religious belief.

Marco Rubio (Catholic)
You cannot do anything without God.  It is a profound and fundamental truth.
Note: That will come as a surprise to the billions of people, such as Hindus and Buddhists, who don’t share that concept of God.

Mike Huckabee (Southern Baptist)
Ultimately, we don't have a crime problem or a gun problem, or even a violence problem. What we have is a sin problem.  Since we've ordered God out of our schools, communities, the military and public conversations, we really shouldn't act so surprised when all hell breaks loose. (2014)

Note: Prayer is allowed in school and everywhere else.  Coerced prayer isn’t.  There’s no evidence that prayer does anything good or bad.

Note: Contemporary views change constantly.  To amend the Constitution to match up with today’s flavor only serves to restrict the future.  The Constitution was left deliberately terse to allow for flexibility.

Jeb Bush (Catholic)
Note: I could find no comments directly related to this topic, but he is typically conservative in his views.

Hillary Clinton (Methodist)
People cite religious or cultural values as a reason to violate or not to protect the human rights of LGBT citizens. This is not unlike the justification offered for violent practices towards women.

Note: Naturally, since these folks are politicians, we can expect completely different and likely opposite comments once the nomination is secured.