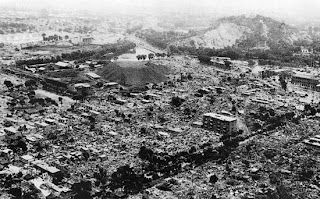 When the Chinese city of Tangshan crumpled during a massive earthquake, the residents there did something very unusual.  Although hundreds of thousands – actual numbers will never be known -- died, the survivors did not hold prayer meetings.  They didn’t ask God for help.  They didn’t even complain to the heavens.
Instead, they dug out bodies, tore down dilapidated buildings and rescued themselves.

In contrast, when Hurricane Katrina leveled much of New Orleans, nationally known preachers insisted God was punishing the city.  Multiple prayer sessions were held and the like.  People promised to reform, sure that the Almighty had raised a vengeful hand.

The contrast is astonishing.

It’s not that the Chinese aren’t religious or have no beliefs.  Nor is it that the poor folks in New Orleans (not to mention Mississippi, where Katrina left deep scars) are overly religious.  This is just a prime example of just how much religion has warped the minds of intelligent people. 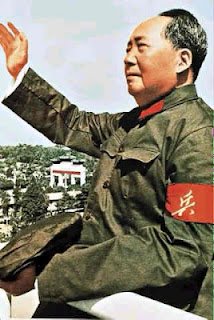 The example came to mind while reading James Palmer’s excellent book on the Tangshan earthquake in 1976 and its impact on Chinese culture.  That year, Mao Tse Tung died, and China began the transformation into a more open, capitalistic society.  The earthquake seemed to mark the demarcation line between the past upheaval of the Cultural Revolution and the post-Mao changes.

Palmer didn’t comment on the lack of religious fervor, but as a religious historian, I noted it.

Around the time I was reading the book, I sat at dinner with a young woman from Cameroon.  We talked about religion.  She is convinced that Judgment Day is on its way, and that Jesus will return to reward the faithful and punish nonbelievers.  She quoted the Bible to support her claims.  The fact the Bible is a collection of beliefs, not history, means nothing to her; nor does the idea that more than two-thirds of the world has a different belief.  Or that even within Christianity, such views vary.

No, she was adamantly sure she was correct. 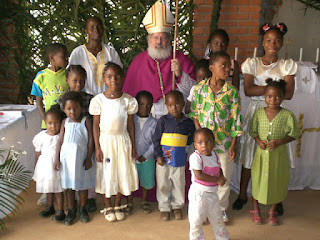 Why? Because Cameroon is run by a corrupt government.  Poverty is rampant.  Educated, intelligent people like her are collecting garbage and working menial jobs, ever fearful government officials will take what little they have for no reason.  To them, therefore, there must be a God to give some meaning to their lives.  Otherwise, they are suffering in vain.

Are they doing anything about the venal government? Are they rescuing themselves?  No.  Unlike the Chinese, who recognize that natural disasters happen randomly, they are praying for divine intervention or a postmortem reward.

I saw exactly the same reaction in my class where we had a modest debate on evolution.  My students agreed it was valid science.  They just disagreed with the concept because evolution is random.  Therefore, God wouldn’t be needed.  They couldn’t accept that because most of them come from countries where government controls are so overwhelming that only a deity could counter it.

That’s the time-honored basis behind religion.  Jews in the 1st century C.E. could not see how they could possibly overcome Roman might.  So, they envisioned some holy and/or military person sent by God who would do the trick.  Jesus became that person’s name.

The Chinese had no such problem.  They rolled up their sleeves and went to work.  Within a few decades, all evidence of the overwhelming disaster has been erased.  No God was necessary.
Actually, except for inner relief, belief in God only benefits for the egomaniacal and selfish who greedily cling to power.  They can tell the downtrodden masses to pray to God, that they will find succor in the coming world.  They don’t have to worry about truly religious actually doing something about conditions here on Earth. Even efforts to deal with overpopulation and Climate Change, issues that could destroy mankind, are fought by religious people on either they are God’s judgment or that God will save his people .

After all, doesn’t the Bible promise that God will be “defense for the helpless, a defense for the needy in his distress, a refuge from the storm, a shade from the heat...” (Isaiah 25:4)  That’s not true, of course, but promises deter desperately needed responses and anti-government anger.

Perhaps it’s time to remember another saying: God helps those who help themselves.  That’s not biblical.  It has been traced to Ben Franklin, one of this country’s Founding Fathers and an ardent supporter of the freedom from religion that protects our society.

Let God handle His tasks.  The rest of us, like the Chinese, can focus on rescuing our portion of the world from all those idle believers.

Bill Lazarus regularly writes about religion and religious history.  He also speaks at various religious organizations throughout Florida.  You can reach him at www.williamplazarus.com.  His books are available on Amazon.com, Kindle, bookstores and via various publishers.
Posted by William P. Lazarus at 4:16 AM