Atheists have gotten a little love from Pope Francis.  The newly installed pontiff created a small stir May 22 by saying the Jesus’ death saved everyone, including atheists.  Anyone who does good, Catholic or not, is redeemed by the “blood of Christ,” he said.

On the other hand, American atheists are probably relieved someone finally said something nice about them.

Various polls have consistently found that Americans dislike atheists more than members of alternative Christian sects or even people of a different faith.  One study found that more people would not vote for an atheist than would oppose a Jewish, Mormon or gay candidate for office.Several states have clauses in their constitutions banning atheists from taking office.

The results actually show an improvement in the negative opinion, but the Gallup Poll reported that atheists, who represent between 4 and 10 percent of all Americans, shouldn’t take heart in the new figures. “First, the numbers of Americans whose prejudice would prevent them from voting for members of other minorities has dropped much farther much faster over the same period of time. Second, the numbers of those prejudiced against atheists hasn't really dropped in the past couple of decades — almost all the progress was made between 1959 and 1978,” the poll said.

Another study titled Atheists As "Other:" Moral Boundaries and Cultural Membership in American Society, found that “atheists are more distrusted and despised than any other minority." The lead author, Penny Edgell (left) from the University of Minnesota, said the findings were surprising;  “We thought that in the wake of 9/11, people would target Muslims.”

A separate 2011 Washington Post report provided one answer for the intense dislike of atheists:  they are considered “immoral, wicked and angry.”

People in the study learned such canards from conservatives, the Post reported, who have rampaged in the media that “the lack of godly faith is detrimental to society.”

Such illogical hatred is nothing new.  It goes back into biblical days, even before atheism existed.  There may have been people who did not believe in God, but they didn’t advertise their beliefs.  The word “atheism” wasn’t even coined until the 1800s.

Nevertheless, early Jewish societies believed that God punished everyone when someone in the group violated prescribed laws.  They got that warped thought from the holy texts that carefully described punishments handed out to the Jews when members strayed: 40 years in the desert, plagues and so on.  No one wanted that.

As a result, everyone had to be vigilant to be sure no one unhooked himself from God’s harness.  It was all about being part of the community.  Nonbelievers, even if they lived in the same place all their lives, were not welcome.

Christians chimed right in after they got power.

As a result, people were burned at the stake and otherwise horribly attacked for daring to be different from the larger society.  Ironically, Jews, who originated the concept, were often the targets when the Western World became dominated by Christianity. 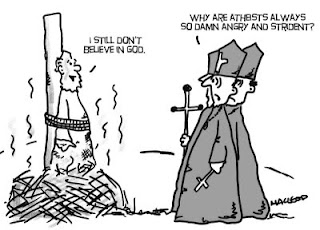 An omnipotent God wasn’t capable of forcing people to obey His laws – which varied depending on the faith – so loving followers burned accused witches, killed heretics and otherwise bloodied the landscape to make sure His will be done.

They were picking on the wrong targets.  Atheists and non-religious people in general “tend to be more ethical than their religious peers, particularly compared with those who describe themselves as very religious,” the Washington Post reported in its study.

They also score higher on tests of intelligence, verbal ability and scientific literacy. “They tend to raise their children to solve problems rationally, to make up their own minds when it comes to existential questions and to obey the golden rule. They are … less likely to be nationalistic or ethnocentric. They value freedom of thought,” the Post found.

No wonder conservatives hate them.  Atheists actually are capable of thinking.

The intense hatred directed at atheists may also explain why Congress is such a mess.  Americans have elected only one atheist, Rep. Pete Stark (right) from Oakland, who served 16 terms ending in 2012.  He waited 24 years to admit he was an atheist and, using proper semantics, labeled himself a “non-theist” rather than use the more explosive word.

Now the pope has stepped up and pronounced that atheists can enjoy their spot in heaven.  It’s a start.  There may not be such a place in some post-life fantasy, but, at least, it might be possible to allow atheists to better enjoy their time on Earth.