Religion has stopped having much influence in Scandinavia.  In Sweden, once a bastion of Lutheranism, churches are empty.  That’s true in Ireland, where the child-abuse scandal has undercut faith in that once staunchly Roman Catholic country.  In England, Poland, Italy and Germany, religious influence is fading away, too.

A Gallup poll released this week found that more than 75 percent of Americans say “religion is losing its influence in the United States,” according to a CNN report.  That’s the highest such percentage in more than 40 years. In fact, the survey found that American perception of religious power has never been lower.

Devout believers have been well aware of the decay in faith. They have been devoting their efforts to inject religion back into American lives, with well-publicized efforts to post the 10 Commandments in courthouses, force religious prayer into public schools and impose their religious ideas on the public in other ways. Naturally, they are only promulgating Christian teachings.  Attacks on minorities like Jews and Muslims have been designed to make sure that Christianity remains dominate and pervasive here.

Their logic is based on biblical teachings where God punishes societies for failing to obey His laws.  As a result, they fear that God will turn his wrath on this society for the collapse of religion in daily life.  People like the Rev. Pat Robertson (left) put such ideas into words by claiming every natural disaster reflects a message from an angry deity.

Nevertheless, such efforts aren’t having much effect.

One reason has to be the demoralizing effect of the child abuse scandal that continues to wrack the Roman Catholic Church, the largest single religion in this country with about 24 percent of the population.  This week, another multi million-dollar settlement was announced.  A Cardinal resigned because of his role in covering up the abuse. Other Cardinals have been reprimanded and lost authority. One church leader is already in jail. Various priests have admitted their participation.  Bishops have stepped down.   There’s long been speculation that Pope Benedict XVI resigned his office because of his ties to the Church’s cover-up.

No country housing the Roman Catholic Church has been exempt from the pervasive scandal.

No prelate has avoided being tarred.  Even beloved John Paul II lost a lot of luster when parishioners realized that much of the attempts to shield abusive priests occurred during his time as pope.  The
Vatican never involved itself in the investigation while John Paul II was in office.

The result has been a decline in financial support, increasing shortage of priests and a decline in the use of Church rituals.  People are not turning away from the belief, but from the institution that represents that faith.

Another reality eating away at religious support is the wide increase in knowledge, specifically related to science.  Religion operates best and most successfully when ignorance predominates.  The Church was never stronger than in the Middle Ages when few were literate, much less educated.  Islam, too, makes sure adherents reject anything that challenges religious teachings.  The Middle East has produced virtually no scientific leaders in about 1,000 years because of that -- after previously leading the world in efforts to gain knowledge.

Today, with the internet, it’s impossible to keep scientific advances away from anyone with a computer.  Even the Church has been forced to acknowledge the accuracy of evolution and the Big Bang theory.  God didn’t create the university; He didn’t create man.  There’s not much left for Him to do. 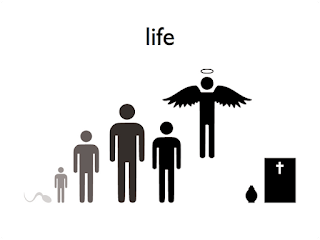 Religion has been relegated to providing dubious answers about the afterlife.  That’s an area lacking data since science can only penetrate that murky time only so far.  The growing awareness that religion has been dead wrong about life, however, ensures doubt about religious teachings about what happens when life ends.

As a result, belief in today’s religions is likely to continue to erode.  That doesn’t mean religions will disappear.  Humans are amazingly resourceful at coming up with new absurd ideas to enthrall themselves.  They’ll happily troop toward some new concept, probably an amalgamation of existing beliefs.

Countries losing interest in the old faiths may someday become bastions of the new as the cycle renews.  We all want answers.  When the old ones don’t work anymore, we are always ready to seek out something fresh to beguile us.