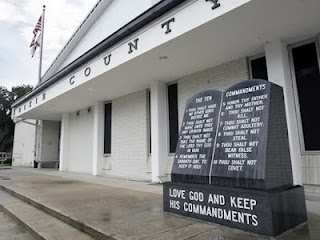 Here we go again with the 10 Commandments.  The small town of Cross City here in Florida is appealing a recent federal judge's order to remove a five-foot high granite monument (right) that displays the Ten Commandments in front of its Dixie County courthouse.

Back in 2003, a similar scene was played out in Alabama where Supreme Court Chief Justice Roy Moore was removed from office for refusing to move another monument to the Commandments from the court's lobby.

There have been identical episodes in other communities.

Here’s something that might make it easier to understand why the monuments don’t belong there: many of them have no religious connotation of any kind, but were designed to promote a movie.

In 1943, a Minnesota juvenile court judge named E. J. Ruegemer decided that America’s youth could be rescued from perdition by seeing one of the early judicial codes.  Of course, youth of America then were fighting the Nazis in World War II, where they were getting a close look at a real hell.  Ruegemer was a member of the Fraternal Order of Eagles (FOE), which initially rejected the modest idea of placing paper versions of the 10 Commandments where errant youngsters could see them and be inspired.  Eventually assured by a group of Catholic, Jewish and Protestant laymen, the Eagles decided to give it a try.

That’s when famed movie director Cecil B. DeMille (left) stepped in.  He was trying to publicize his movie, “The Ten Commandments,” and thought the plaques would do the trick.  He wanted bronze plaques.  Ruegemer argued for stone.  DeMille had no problem with that.

An estimated 2,000 were created and shipped around the country.  Even though the film came out in 1956, the effort to set up Commandment monuments continued for an estimated 20 years.

The Alabama version was created by former Chief Justice Moore (right) and had nothing to do with the FOE.  However, one of the FOE monuments in Duluth, Minnesota drew legal attention in 2004.  The City Council there ordered its removal soon after a suit was filed against the city.

Courts have continually sided with opponents to the monuments, agreeing that having the 10 Commandments on city property constituted state endorsement of religion.  A Texas state court disagreed only because the monument was located near a little-used side door.  How its location where no one could see it helped sway miscreant youth isn’t clear. Cities like Kansas City, Kansas and La Crosse, Wisconsin have either moved the offending monument or sold it back to the FOE.

The second reason to remove the 10 Commandments from any courthouse is even stronger: it endorses a religious view.  However, this country is not Christian, Jewish or Islamic nor endorses any faith.  Founders of this nation specifically did not want any religion to dominate, knowing it would lead to the kind of hateful warfare that marred European history for the previous centuries.  Many of the early settlers who came to America from England did so for religious freedom: Catholics in Maryland; Quakers in Pennsylvania; and Calvinists in Massachusetts.  Roger Williams (Rhode Island) specifically supported religious freedom as did the more financially oriented pioneers in Virginia.

Religious leaders of many groups, particularly Anglican, were not opposed to having their own religion as the dominant faith, but didn’t want another religion to supersede or the government to dictate beliefs to them. That led to the only choice: religious freedom for all Americans.

The 10 Commandments are decidedly religious and oriented toward Judeo-Christian faiths.  As society evolves increasingly multi-religious, an emphasis on one kind of faith is simply wrong.  It directly violates the First Amendment to the Constitution, the civil right that allows any religious organization to function freely and attempt to spread its message.

Third, there is no one set of Commandments.  Look at Exodus 20:2-17 and Deuteronomy 5:6-21.  A third version has been culled from the text by scholars.   Should we follow the one that says people must celebrate the Jewish agricultural holiday of Sukkoth?

Nor do the Commandments themselves stand up to scrutiny.  For example, the first one says: “I am the Lord thy God who brought you out of Egypt.”  That refers specifically – and only – to Jews.  It’s also not a commandment.  Some people prefer to make Number 2 – “You shall have no other gods before me” -- into Number 1 where it creates an open confrontation to Hindu gods as well as to any religion with alternative deities.

Number 2 then becomes a requirement not to create an idol.  Actually, the text reads: “You shall not make for yourself an idol, whether in the form of anything that is in heaven above, or that is on the earth beneath, or that is in the water under the earth.”  That plays havoc with all those icons that fill homes and churches, all of which are in human form.

The third, to “remember the Sabbath,” has little relevancy in an era when every day of the week is treated the same.  Besides, the Islamic day of rest is Friday; in Judaism, it’s Saturday; and, in Christianity, it’s Sunday.  Which Sabbath should we remember?

The “shall not” aspect of the 10 Commandments seems plausible: no stealing, no bearing false witness, no coveting.  Of course, you aren’t supposed to covet your neighbors’ fields, farm animals and slaves.  Most of us have rarely seen a cow or a sheep nowadays, much less desire one.  As for slaves, we fought a long war over that issue to make sure there aren’t any.

However, the famed “Thou shall not kill,” actually refers to murder not at blasting way at helpless critters.  Otherwise, the National Rifle Association would be up in arms.

The reality is that the 10 Commandments sound good when mentioned, but don’t have the same cachet on close inspection.  They certainly don’t belong in any public structure paid for by the taxes of people who may disagree with at least some of them.

Cross City residents may not believe it, but American law they swear by is designed to protect the rest of us from religious zealots like them.