A dear friend was able to find an affordable apartment after much aggravation from dreadful neighbors in her old residence as well as financial problems.  She promptly thanked God for helping her.

According to her bedrock Christian belief, God made sure she had a safe place to live.

Nope.  She only thanked God for the positive aspects in her life. 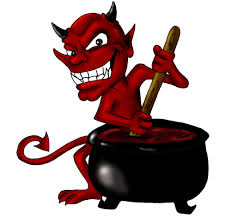 Definitely, God is in the catbird seat.  He can’t do a thing wrong and gets all the praise when things go right.

In fact, that’s why Christianity invented the devil.  Who has to be responsible for all the negative things that happen?  In that scenario, God provides strength to overcome the evil caused by Satan.  How convenient.

There really was no choice for early Christians who had grown up believing in Judaism, which doesn’t have a devil.  They believe only in God.  When things go wrong, Jews blame themselves.  Amidst troubles, they must have disobeyed some arcane heavenly law, and so God punished them.  Even such a catastrophic event as the eviction of millions of Jews from Spain in the 1400s was labeled the “birth pangs of the messiah.”  Bad things had to happen to prepare the way for a Jewish king who would reconquer Israel and create an independent Jewish state there.

Of course, that didn’t happen for another 500 years – without a messianic figure -- but no Lucifer had to be invoked to cope with the disaster.

The same is true with the Holocaust, an even more-horrid assault on Jews.  No devil was cited as the cause.  Orthodox Jews actually blamed their less-religious counterparts for incurring God’s “just” anger, turning Nazis incredibly into heavenly avengers.

On the other hand, Christians didn’t adopt that “blame self” approach.  Nope, they went even further into absurdity by imagining a dark avenger who constantly attacks humans.  Why?  He just wants to do bad things, sort of the Iago of the netherworld.  They drew on images of pagan gods for inspiration and declared everything outside their narrow tenets as evil and heretical.

So, today, in the Christian mindset, there are two gods: one, a supreme deity who spends His eternal days confronting the other one, called Beelzebub or many other names, who is constantly causing problems.  How else could Christians explain the existence of evil in a world supposedly overseen by a perfectly good deity? No other monotheistic religion has that problem.  In Islam, for example, “genies” try to lead true believers away from the correct path, sort of a test of faith, but the ultimate decision for good and/or bad choices rests on the individual.

That’s not the Christian approach.  That religion’s far-fetched reasoning brought into existence such things as witches.  After all, someone must be abetting Satan.  Why not the old woman who lived down the street and worked with herbs?  She isn’t friendly; she must be in cahoots with the devil.  So must be anyone who dares to raise intellectual objections to the faith’s absurdist philosophy.

It’s an easy answer, of course.  It absolves the individual of any blame.  While Jews hunker down to study holy books and look for answers, Christians battle an imaginary, sinister creature they invented.

And everyone praises God, who doesn’t have to do anything but take credit when something positive happens.  Actually, Christianity must insist on the existence of the devil.  Without Satan to kick around, churches would lose support from frightened and gratefully deluded members, like my friend.

He is the author of the famed novel The Unauthorized Biography of Nostradamus as well as The Last Testament of Simon Peter; The Gospel Truth: Where Did the Gospel Writers Get Their Information; Noel: The Lore and Tradition of Christmas Carols; and Comparative Religion for Dummies.  His books are available on Amazon.com, Kindle, bookstores and via various publishers.  He can also be followed on Twitter.
Posted by William P. Lazarus at 9:14 AM