How Old is the Earth? 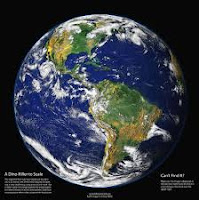 Back in 1654, when such issues as the age of the Earth were matters of conjecture and faith rather than of science, Irish Bishop James Ussher published a small book with a big Latin title that translates to: "Annals of the Old Testament, deduced from the first origins of the world, the chronicle of Asiatic and Egyptian matters together produced from the beginning of historical time up to the beginnings of Maccabees.”

In it, Ussher relied on the Bible to determine that the Earth was created about 6 p.m., Saturday, October 22, 4004 BCE.

That was a good estimate for the time.  After all, by then, Greek philosophers, Jewish sages, Martin Luther and many more scholars had already come up with similar dates by extrapolating from natural events, other texts and/or biblical accounts.  However, they all turned out to be wrong by a few billion years.

To arrive at the correct date, scientists skipped the guesstimating part and relied on hard evidence.

For starters, in the 1660s, not long after Ussher’s famous estimate, Danish scientist Niels Stensen studied geological formations and realized that many had been folded over and twisted.  A Lutheran who converted to Catholicism and was later beatified, Stensen (known in English as Nicholas Steno) showed that different fossils appeared in different strata.  Robert Hooke, an English scientist who lived in the 1700s, built on Stensen’s work to suggest fossils could be used to date the Earth.

Interesting, Leonardo da Vinci had already deduced that the Noah story in the Bible was incorrect because of fossils.  In the early 1500s, Leonardo noted that fossils lay in stratified layers, something that couldn't happen in a flood.  Then, all kinds of creatures would have been swept together to their deaths.  His observations were never published and only discovered centuries later when his diaries were translated.

By the late 1700s, James Hutton, the father of modern geology, examined the landscape in his native Scotland and concluded that the Earth was in a constant state of flux.  He could see evidence of erosion and uplifting.  He described the existing environment as being built from “materials furnished from the ruins of former continents” and that the process had occurred multiple times.

Note that none of these men had actual data, but, like Ussher, were relying on whatever evidence was available to draw a conclusion.  They just disagreed with Ussher on the results.


In the 19th century, scientists attacked the question of age by examining heat: how hot would the Earth have been when it appeared? What was the heat now?  How long would it take to reach that level?  The same reasoning was applied to the sun: How hot was it at first? How hot is it now? How long did it take to reduce the heat?

Meanwhile, geologists approached the topic by examining the depth of sentiments in the ocean and determining how long it took to reach those depths.  They also looked at the salt content of the ocean on the same basis: how long would it take rivers to deliver that much salt?

The research led to the conclusion that the Earth had to be 100 million years old.  That’s still not billions, but it’s well beyond Ussher’s limited time scale.

In the 1920s, technology finally reached a level to provide a more conclusive answer. Annual layers in European oak trees show some have survived 12,000 years.  Ice cores from the Antarctic extend the Earth’s age as far back as 740,000 years.

That clearly refutes any young Earth theories, whose adherents prefer Ussher’s computation or at best a few thousand years more.
Undaunted, researchers kept pushing back the estimated age of the Earth. Scientists developed mass spectrometry, which determines the amount of atoms in a sample.  For example, an unstable element like Potassium-40 slowly decays into Argon-40. As a result, over time, a rock will have more and more Argon-40 and less and less Potassium-40.  That change occurs at a known rate.  How much Argon-40 is there? How much was there at the beginning? How long did it take to reach the current chemical content?

The same process is used with Carbon-14, which is more abundant and perfect for dating bones and other carbon-based artifacts.

This scientifically unimpeachable approach explains why most people know that dinosaurs lived millions of years ago, and that humanoids first appeared around 4 million years ago.

Old rocks found in Greenland turned out to be 3.6 billion years old based on their chemical content.  Then, more recently, zircon in Australia was dated to 4.4 billion years.

Meteorites have added to that age.  As old as the solar system, they have been found on Earth and dated.  The results of chemical analysis have been consistent: the rocks are all 4.55 billion years.  The Earth must be as well.

The universe has to be older.  That age has been worked out after scientists realized that light has to travel through space.  Light from the sun takes 8.3 minutes to get here, 4.3 years from the nearest star, and about 8,500 years from the center of the Milky Way. Using light shifts and the distance to far-distant galaxies, scientists have determined that the universe must be at least 13.7 billion years old.

None of that is conjecture, but research based on proven scientific principles that were thoroughly and carefully tested, compared and tested again.  Scientists can’t rely on faith.  They have to determine facts.

In the 1700s, mystic poet William Blake unknowingly commented on the reality of scientific research:

To see a World in a Grain of Sand
And a Heaven in a Wild Flower,
Hold Infinity in the palm of your hand
And Eternity in an hour.

That’s what scientists do: using technology, they have found the secrets of age in the chemicals hidden in a grain of sand.