History Faces Off with Belief

The nice part about being a religious historian is that I don’t have to invent facts.  I just have to do as much research as available and see where the facts lead.

That’s much easier these days with the internet.  I used to have to spend hours in local libraries, trying to find what information I could.  Now, by going on valid sites, I can quickly find pretty much anything I need to know.

Take something as intriguing as Abraham’s Well in Beersheba, a popular spot for tourists.  I had a chance to visit the site.  It’s a well all right and obviously very old.  During my visit, I saw lots of people praying there.  They clearly believed it was a sacred site.  That’s true for any object of veneration, from the Shroud of Turin, the Wailing Wall or a fragment of the True Cross.

A believer doesn’t need any more “proof” than visual observation or enthusiastic claims.

More than that, geology would help determine if the well could have been in existence for thousands of years.  Maybe there was no water then, and some meteorological or seismic event created the flow in recorded time.

What if the well turns out to be only 1,000 years old?  That would eliminate Abraham as a link, since he must have lived close to 4,000 years ago.  That’s no problem for an historian.  However, for a believer, it’s not that simple.  A believer has a choice: either to ignore the research – and typically attack the messenger – or to accept the research and change the belief.

You know which option a believer will choose.

That’s exactly why believers reject evolution, which has been repeatedly proven correct in both labs and in the field.  In one egregious situation, a father recently filed suit against the university his daughter is attending for teaching evolution, which, he says, is a “belief” and will hurt her possible success as a veterinarian.  How funny: animals evolve, too.  Any vet unaware of that won’t be able to do a good job.

The suit won’t go anywhere.  Courts have already ruled that evolution is science, not a religious belief.

Believers, however, have a dilemma.  If evolution is fact, then their belief in a single creation is incorrect.  The Roman Catholic Church has evaded that trap by accepting evolution and saying it does not contradict religious teachings.  Not everyone is that flexible.

I don’t have any concern at all.  If science somehow proved evolution was incorrect, I can alter my thinking to conform to the new paradigm.  I wouldn’t have to with evolution, but have already done so when facts turn up that belied earlier findings.

That often happens in religious history, where new data confirms one explanation at the expense of others.  Take the Dead Sea Scrolls for example.  How did they end up in ceramic vases in caves near Qumran? Different historians have theorized:  (1) They written and hidden by a sect of religious folks called Essenes. (2) They are the remnants of a library of a resort located on the Dead Sea (3) They are sacred books from the Temple in Jerusalem, hidden in the caves ahead of the Roman army or (4) They are books of wealthy Jews trying to save them from the Roman Army.

All of the proposals are based on facts, but only one is likely to be correct.  Eventually, enough evidence will likely be found to pinpoint the correct option.  Supporters of the other three proposals will quickly shift their ideas.

This has already happened numerous times where scientists and scholars wedded to one concept, such as the shape of DNA, quickly converted when clear evidence was found that contradicted earlier ideas.  In several famous instances, scientists who built their reputations on one set of supposed facts stood up before meetings of their colleagues to admit they were wrong and to embrace the new research.

Scientists come up with updated findings all the time because all ideas, from evolution to anything else, are thoroughly tested and tested again.  New results are tested repeatedly, too, until a consensus is reached based on clear, hard evidence.  With modern technology, that testing is more rigorous and more exacting.  The final findings are more obvious. 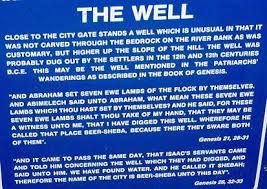 Believers don’t have to worry such effort.  They simply believe.  That’s great.  Belief helps many people get through life.  Their belief may even be correct.  However, if an aspect is shown to be wrong, then they ignore the facts.  For example, the sign at the Abraham’s Well says it dates to the 12 or 13th century BCE, which makes it too young for the Patriarch.  Facts like that haven’t deterred believers.

That’s when advice from Dr. James Charlesworth, one of the world’s foremost religious historians, could come in handy.  He is George L. Collord Professor of New Testament Language and Literature and Director of the Dead Sea Scrolls Project at Princeton University.  Charlesworth was one of four scholars who addressed 400 or so Protestant ministers at an annual Pastoral College hosted by Stetson University some 20 years ago.  The topic that spring was the historical Jesus.  I went because that’s a subject I am very interested in.

The four scholars used up to date research to explain that everything thought to be known about Jesus’ earthly existence has been proven to be incorrect.  The evidence dismayed the ministers.  One finally stood up and plaintively asked what he and his colleagues should tell their congregations.

That satisfied the ministers.

It’s a good answer.  It leaves belief to the believers and facts to the scholars.  They can then ignore each other in peace.