Voters Turned Off by Religion in Politics 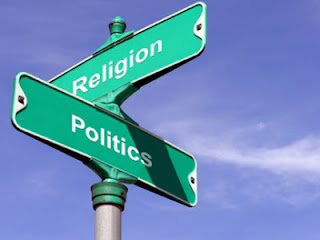 The Republican knee-jerk bowing to the religious right comes with a bite.  More Americans are walking away from organized religions, apparently in opposition to the infusion of religion into politics.

A new report, issued last week, found that 20 percent of all Americans – as many as 24 percent of males – no longer belong to a faith or want to.  They aren’t turning into agnostics or atheists; they are simply shunning the traditional religions and opting for nothing.

"This is a product of the involvement of the religious right in American politics and the increasing connection in Americans' minds, the minds of moderates and liberals, that religion equals conservative politics equals religion," said Claus Fischer, a researcher with the University of California-Berkeley, which joined with the University of California and Duke for the study.

Not surprisingly, the research found “40 percent of liberals claim they have no religion, compared to just 9 percent of conservatives.”

Fischer said. "Increasingly, people identify and link organized religion with anti-gay attitudes, sexual conservatism, a whole range of those kinds of social cultural values.  One way you can think about it is, this is blowback."

That does not bode well for the Republicans, who have been shanghaied by the religious fanatics’ wing of the party.  Zealots like Sen. Rand Paul (R-Kentucky), Wisconsin Representative Paul Ryan and former Alaskan Gov. Sarah Palin only foreshadow more and steeper declines in public support.

If doubting that sailing off a right-wing cliff might not be the best policy, the Republican Party might consider some other statistics, in this case from the Pew Research Center.  The center’s February survey found that the Republican Party’s image is at an all-time low.  Some 62 percent of Americans in the survey said the GOP “is out of touch,” while 52 percent say “the party is too extreme.”

Only 33 percent of Americans view the party “favorably,” the survey reported.  No coincidentally, public support topped 50 percent before George W. Bush was elected president in 2000 and promptly began to plummet.

Looking at the dismal  numbers, Jeb Bush, the former Florida governor, George W.’s brother and potential Republican president candidate, may consider reconsidering his comment that having the Bush name does not “carry any baggage.”  The survey results demonstrate conclusively that the Bush name is actually like strapping a freight train to a candidate’s back.

All anyone has to do is say “Bush,” and the audience either guffaws, gets violently ill or heads for the exits.

What a family history.

Other presidents with family relationships did much better:  John Adams and his son John Quincy were both respected although neither did their best work in office.  Franklin Roosevelt and cousin Theodore each rank among the greatest.  On the other hand, the Bushes more closely resemble William Henry Harrison, who died after a month in office without single accomplishment, and his great-grandson Benjamin, who was a one-term president famed for alienating everyone with his humor-less nature and pinched mind.


Even that history won’t undermine another Bush bid.  Americans are suckers for a familiar name, even of Jeb probably won’t carry Florida since residents already endured his style of inept management.

That may not matter, now that public opinion is deserting the Republican message.   The American Enterprise Institute noted in a recent survey that “Republicans committed political suicide (in 2012) by allowing a minority of right wing ideologues to dominate the stage. Their rhetoric completely turned off a huge swath of the nation against the party …”


The Institute added, “Right wing fanatics make up a relatively small percentage of the Republican Party. Yet, their influence over the party’s platform is huge. It is clearly not a situation that the American electorate appreciates.”

Some Republicans have gotten the message.  Slammed by conservative Republicans for daring to propose compromise with the Democrats, Lindsay Graham (R-SC) is now considered the overwhelming favorite to retain his Senate seat.

If the rest of the Republican Party doesn’t follow his lead, the GOP can plan on bowing out of American political life.

Long-time religious historian Bill Lazarus regularly writes about religion and religious history.  He also speaks at various religious organizations throughout Florida.  You can reach him at www.williamplazarus.net.  He is the author of the famed Unauthorized Biography of Nostradamus; The Last Testament of Simon Peter; The Gospel Truth: Where Did the Gospel Writers Get Their Information; Noel: The Lore and Tradition of Christmas Carols
Posted by William P. Lazarus at 7:16 AM