A recent Facebook post announced that Rev. Pat Robertson said the Earth is probably 4.54 billion years old.  In perhaps the only intelligent thing he has said in years, the aged minister apparently had a moment of clarity and disavowed the biblical account that the Earth was created in six days.

Naturally, Robertson’s comment was immediately assailed by the faithful, who credited him with being senile or insane.  Such insults are the only weapons left religious troglodytes when confronted with hard-earned facts. 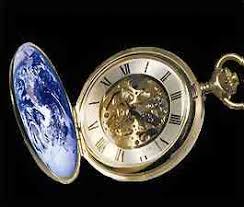 Dating the Earth has been difficult even relying on the Bible.  After all, the Holy Book  may say the process took six days, but since the sun and moon don’t appear until day five, there’s no way to tell how long the previous four days were.  That issue was raised in the Scopes trial in 1925, where a science teacher was charged with violating then-state law by teaching evolution.  On the stand, state expert witness William Jennings Bryan had to concede that since no one could measure time without the sun and the moon, a day could have been a billion years.

In Bryan’s day, the idea that the Bible was perfect had already taken hold.  That wasn’t true 200 years before or 2,000 years.  Early sages saw the Bible as a guide, not a statement of unbreakable facts.  Indeed, they formulated the idea that biblical laws could be for a society at one time and not valid later on.  That concept allowed the Bible to retain its position in Western life.

Otherwise, science and societal changes would have rendered it irrelevant.

At first, monotheistic religions actually thought the biblical teachings were compatible with science. Muslim, Jewish and Christian scholars were sure their research would reveal the truth of God’s handiwork.  In that, they were following Greek and Roman scholars in the West, Persian and Chinese in the East, whose intense astronomical studies revealed planets, meteors, stars and moons.

Unfortunately, as science crept on, it slowly overtook older ideas encased in the Bible.  In response, religious leaders in all faiths reacted harshly.  Scientists were banished; their books burned or placed on lists of forbidden documents.  Just as examples, Bernard Spinoza was excommunicated; Galileo was placed under house arrest.

Scientific efforts to work out the age of the Earth began in the 1600s.  They added millions of years.  Then, starting in the 1920s, geologists realized that isotopes of some elements decay at a steady rate. Using a modern rock to determine how much of that element should be trapped, they can study an ancient rock to figure out how much was left.  It’s a simple mathematical formula to determine the difference and the length of time needed to reach that point.

The test can be done repeatedly and has been.  The oldest rocks on this planet found so far come from Canada.  They are 4.05 billion years old.  Other ancient rocks that date from 3.4 to 3.8 billion years exist on many continents.  Mineral grains found in Australia have been dated to 4.3 billion years ago.  The range in ages derives from reality that the Earth moves. Older rock often sinks back into the molten center to be melted down and re-emerge later.  As a result, scientists are thrilled to have located any old rocks.

The results have been consist, and not just for Earth rocks.  Moon rocks, stones dislodged from Mars that traveled through space to Earth and meteorites consistently come up with the same  billions of years cited by Robertson.  Rocks from the moon, which does not recycle, also support scientific claims.  Brought back by astronauts as well as sent this way after meteorites struck the Moon, the samples reveal an age from 4.4 billion to 4.5 billion years old.

The results are a direct result of scientific progress in mass spectrometry, sampling and laser heating.

The remaining years needed to reach 4.54 billion are an estimate of the time necessary for the Earth
to coalesce into a solid ball.

The Bible is locked in place. Science is not.

Elements of the Bible remain valid, such as how to live a good life.  Science, however, has vivisected the rest.

Those true believers who insist in tying their ideas to outdated ideas can only expect to be further marginalized in a  society that is increasingly deserting traditional religions.

Perhaps that’s what motivated Robinson, whose previous claims that climatic events were messages from God were met with well-earned derisive sneers.  Maybe he was just tired of being irrelevant.

Long-time religious historian Bill Lazarus regularly writes about religion and religious history with an occasional foray into American culture.  He holds an ABD in American Studies from Case Western Reserve University.   He also speaks at various religious organizations throughout Florida.  You can reach him at wplazarus@aol.com. He is the author of the recently published novel The Great Seer Nostradamus Tells All as well as a variety of nonfiction books, including The Gospel Truth: Where Did the Gospel Writers Get Their Information; Noel: The Lore and Tradition of Christmas Carols; and Dummies Guide to Comparative Religion.  His books are available on Amazon.com, Kindle, bookstores and via various publishers.  His website is wlazarus.com, which is still under construction. He can also be followed on Twitter.