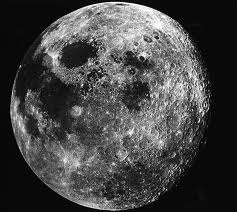 Shortly after Adam Palmer held a small revolver to his head, the Moon told him to stop.

Palmer distinctly heard the Moon speak to him.  It spoke in a pleasant, almost kindly, yet firm voice.  He had often talked to the Moon, telling it how pretty it was.  He even had a framed image of a gaudy Aztec moon goddess hanging in his Findlay, Ohio apartment.  This was the first time the Moon actually spoke back.

He placed the gun on an end table and stared through the open window.

Palmer thought about the comment for a moment.  Why not?  Searing heat had frazzled electric lines.  No one in the country had any electricity except for people with portable generators, and they provided little relief from the soaring temperatures.  Residents along the coasts could go in the ocean, but dead fish floating in on the tides had thoroughly befouled the beaches.  Dead bodies only added to the pollution.

Rising water from melting ice had swamped coastal communities anyway.  Palmer was far enough inland in Ohio to escape, but lacked fresh water.  Lake Erie was too far north and supposedly had been seized by a small army headed by a self-styled king.  At least, that’s why a stranger said last week while en route to southern Ohio.  The stranger had not stayed.  There was nothing in Findlay anyone wanted.

There certainly wasn’t any food.  Refrigeration was a memory, leading to anarchy in former grocery stores and restaurants.  Pets were either released or devoured.  Palmer’s cat, Tinkerbell, now was foraging in the bushes outside the apartment house.  At first, it scratched to come in at night, but Palmer resisted.  He didn’t want to share the cat food.  Now that his larder was depleted, it didn’t matter.  Tinkerbell brought him a small anole last week.  He ate it gratefully and had not eaten since.
Finally, Palmer walked outside his apartment.  The hallway of the apartment house was littered with debris.  No one was going to pick up the discarded clothes, books and other flotsam of civilization.  Someone had bashed a hole in a wall. Exposed wires dangled harmlessly.  The stench of death lingered everywhere.  Otherwise, there was only quiet.

Palmer knocked on the apartment of the older woman who lived next door.  Mrs. Huddleston had essentially barricaded herself inside with her pet Chihuahua named Precious.  Palmer had talked to her maybe once or twice since chaos had descended two months ago.  He had not tried in a week.  Mrs. Huddleston always kept a pantry full of food and so was well prepared when the power vanished.  However, as Palmer well knew, the food supply would run out eventually.

No one answered his knock.  Mrs. Huddleston usually quavered a hello, and he would identify himself.  She trusted him, but no one else.  They would talk briefly, mostly lying about their condition.

He knocked again.  The rap echoed down the hallway and faded away.  Finally, Palmer lowered his shoulder and rammed it into the wood.  The door shuddered.  Then, weakened by the high temperatures, it simply fractured.  The doors were cheap anyway.  The residents in the apartment house used to joke that the locks kept the doors upright.  This time, the chain held only a small part of the wood.  The rest splintered with large cracks creating a jigsaw pattern.

Palmer reached in and unhooked the chain.  The door fell open.   He heard a strange, vicious growl.  Precious looked up at him with fury on its face.  It was next to Mrs. Huddleston’s inert body.  The dog did not charge Palmer, but simply issue warnings that rumbled up its small throat.  Mrs. Huddleston had refused to leave her apartment, fearful that someone might grab her beloved pet and eat it.  Now, Palmer could see, the dog was reciprocating.  It had flecks of meat dangling from its mouth.  As Palmer watched, the dog bit into Mrs. Huddleston again.

Palmer backed out.  That meal would only last so long.

He walked downstairs.  Few people were out.  They were all gaunt skeletons.  Someone had started a fire and was burning something.  A strange aroma had drawn a few scraggly, famished souls from various shelters.  Standing in the darkness of night, they gathered around the fire, hoping for a morsel.

An historian, Palmer knew what was happening.  He thought of ancient sieges where desperate people ate other humans, where mothers put their own children in the fire.  Few would survive this siege to tell such stories.

Silently, his stomach aching, he slowly went back to his apartment.  He did not bother to close the door.  He picked up his gun and walked to his window.  The Moon turned its full face toward him.
“Now,” the Moon said.