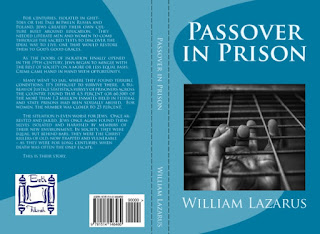 My recent book, Passover in Prison, details abuse of Jewish inmates in American prisons.  It would seem to have a narrow focus, but that’s not true.  The topic actually touches on some very serious issues that have nothing to do with the prisoners themselves.

To begin with, the Christian administrators, guards and inmates inflicting the abuse are sure their religion is superior.  As such, they feel entitled to impose their beliefs on their hapless prisoners, who are few in number and espouse a faith that has been targets of hate for centuries. However, given a chance, they would do the same thing to Muslim inmates as well as members of any other non-Christian faith.

That’s exactly what happens throughout history in any society whenever and wherever one religion dominates.  Everyone not in that faith is ostracized, belittled and often condemned.

Examples abound. When Jews controlled a small section of what is now Israel about 2100 years ago, a Jewish army imposed the Jewish faith on residents of Samaria, killing those who refused to convert.  The Muslim armies in the seventh and eighth centuries did the same thing as they swarmed through North Africa, the Middle East and Western Europe.  Christians followed suit throughout Eastern Europe, going on murderous rampages through pagan eastern lands, relying, as did the other monotheistic faiths, on sacred texts that countenance massacres of nonbelievers.

The Nazi approach in the 20th century was incredibly sinister, but the Germans were following a well-established model.

That is relevant because, in this country, political candidates from the religious right, who seemingly dominate the Republican Party, have made clear their intentions to impose their religious views in such areas as civil rights and international politics, among other areas.  In fact, my book details how the situation for Jewish prisoners deteriorated under the George W. Bush administration, which erroneously thought imposing Christian religious teachings would somehow lead to reformed criminals.

In reality, abuse of one group is abuse of all.  When a religion discriminates: everyone else is wrong and therefore liable to be forcibly chastised in some manner in the name of one god of another.

In addition, the abuse of prisoners reflects the chaos in our prison system.  The United States has a larger percentage of residents in prison than any other country.  I find it hard to believe that Americans are less law-abiding than in other countries.  After all, this country is known as a “nation of laws.”

In reality, the laws vary from state to state with little sense of fairness or equality.  The abuse of any prisoners continues as a result.  We need drastic prisoner reform and a comprehensive examination of the laws, something that conservative religious groups heartily oppose.  Caught up in their black-and-white view of the world, they want all “evil” locked up with the key sent into oblivion without regard to the individuals involved.

President Barack Obama recently commuted the sentences of 46 drug offenders because their sentences did not seem to fit the crimes.  There are probably thousands more in that situation, not to mention many who have ended up behind bars because their limited resources prevented adequate legal representation.

The 1950s movie “12 Angry Men” characterized that kind of situation.  In it, a member of the jury convinces his skeptical counterparts that the young man on trial may not have been guilty of murder.  The story was fictional, of course, but the events depicted happen too often.

Finally, the abuse of prisoners reflects the growing conflict between security and individual safety.  The founders of this country understand that dichotomy.  Benjamin Franklin put it succinctly in a letter:  “Those who surrender freedom for security will not have, nor do they deserve, either one.”

Americans somehow believe that putting people in jail —1 in every 31 U.S. citizens according to 2014 statistics -- will make us all safer.  Actually, all we are doing is creating more prisoners, more crowding and more abuse.

Instead, we need to invest in communities to create jobs so young people can have ample opportunities to earn money legally.  We need eliminate discrimination which forces many to seize short-lived opportunities in crime for long-term success in society.

Nothing is going to change unless society moves beyond the mindless repetition of religious cant into the realm of sincere effort.