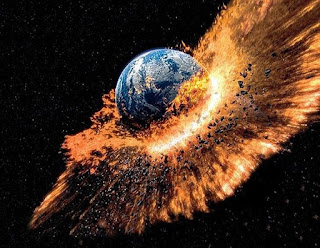 For all of you disappointed that the world did not end on the Mayan cue, there will be plenty of opportunities ahead. Convicted pedophile Warren Jeffs started the ball dropping by predicting an apocalypse on New Year's Day.  Oh, well.  Wrong again.   There will be others.  Apocalypses are an integral part of Christianity, and another failed prediction isn’t going to change that.

The idea was born when Jesus died.  According to Jewish belief, the anointed king – “messiah” in Greek -- was supposed to bring about a Jewish theocracy.  Jesus didn’t; therefore, to most Jews, he couldn’t be the messiah.

On the other hand, a few of his followers weren’t willing to concede the obvious.  They decided that Jesus would have to come back to complete his heavenly-mandated assignment.  Therefore, he didn’t die.  Of course, when he returned, it wouldn’t be a simple event.  Oh, no.  The whole world would be destroyed in an epic battle with evil.  No matter that the idea came from the Zoroastrians whose faith is based on an ongoing struggle between good and evil.

The end result has been an unceasing effort to pinpoint the exact moment Jesus will return, killing all nonbelievers and raising the faithful to heavenly glory.

St. Paul was sure it would happen so soon that some people then living in his day – 40 to 60 C.E. – would witness the astonishing event.  He grew less positive as time passed.  Some 350 years later, St. Augustine spent part of his time trying to dampen expectations of an immediate cataclysm.

His efforts, while laudable, had little effect.  If anything, the last 75 years have seen a sharp rise in predictions of a Jesus’ immediate return.

Some, like the Mayan calendar hoax and the year 2000, caused more of a stir.  All of them, however, drew supporters doomed to disappointment.

In 1954, Chicago housewife Dorothy Martin said that aliens contacted her to warn of impending massive earthquakes that would destroy North America.  She naturally attracted followers who would be carried to safety before the big date in August.  When nothing happened, Martin left, only to return and start another cult.  The second one is still around.

In 1988, retired NASA engineer Edgar Whisenant produced a book titled Why the Rapture Will Be in 1988. Some 4.5 million copies were sold.  His evidence was seemingly perfect: he relied on the biblical account.  September 1988 was the month.  No doubt about it.  No matter that lots of other people have used the same source to come up with totally different months and years.  September that year came and went with no apocalypse.

Following the time-honored pattern, Whisenant decided he had used the wrong calendar.  He was a year off.  However, the world didn’t end in September in 1989 either.  “I guess God doesn’t do things the way man thinks,” he said.

The next year, Elizabeth Clare Prophet, who formed her own religion, said aliens warned her of an impending nuclear attack.  About 2,000 people joined her at a Montana campground in 1990, waiting for the aliens to whisk them to safety.  After the assigned day came and went, some people left, but not everyone.  Some are still there, prepared, waiting.

They should check out the Rapture Index, which was created in the 1980s by Todd Strandberg, an evangelical Christian.  He identified 45 different elements that would cause the end of the world, when true Christians are carried to heaven (the rapture), while everyone else suffers.

Strandberg started the index after “I just began to realize that the events outlined in the Bible were going to someday take precedence over every other occurrence in our lives.”

Points are assigned to such categories as False Christs, Satanism, Inflation, Liberalism and Volcanoes.  The highest total is 225: the higher the number, the closer to the rapture.  A year ago, the number was 184, the highest ever recorded.  It may go up.  Strandberg claims the 2009 election of a president of the European Union presages an antichrist.  Actually, there is no one president, just leaders of various aspects of the EU.    The closest may be Herman Van Rompuy, a Belgian politician who is president of the EU Council and was elected in 2009.

On a more scientific basis, in 1947, scientists with the University of Chicago created a clock to measure when they thought the world would be destroyed in a nuclear holocaust.  Admittedly, no Jesus is involved, but the apocalyptic element is the same.  The original idea has been updated to include climate change and other similar elements.

Today, the Doomsday Clock shows 6 minutes to midnight.  Unlike the Mayan calendar, however, scientists aren’t dumb enough to pick a date when the seconds finally run down.

And there will be an end.  Everything must end.  Except for absurd predictions, of course.

That leaves plenty of opportunities for people with less common sense than chipmunks to huddle in stocked bomb shelters awaiting an apocalypse and emerging with their frightened imaginations unaffected by reality.