Take Christmas out of December 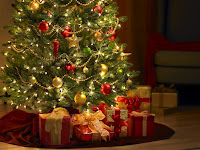 There’s something about Christmas that seems to bring out the worst some people, even as most folks seem happier, bathed in the positive spirit of the month.  Their counterparts see this as a time to impose their religious beliefs on everyone else in a most-un-Christian-like manner.

They shrilly complain that people are attacking Christmas because businesses increasingly require their employees to say “Happy Holidays” instead of “Merry Christmas.”  There was anger because Rhode Island labeled its state tree a “holiday” tree rather a Christmas tree – as if any other religion decorates trees this time of year.

They are furious that atheists objected when public school classes were taken to see the traditional Charlie Brown Christmas show.  Cities have been forced to remove a creche, take down other decorations and stop Christmas festivals.

Conservative commentator Pat Buchanan (left) has protested these sporadic efforts: "What we are witnessing here [with the secularization of Christmas] are hate crimes against Christianity -- the manifestations, the symptoms of a sickness of the soul, a disease a Vatican diplomat correctly calls Christianophobia," the fear and loathing of all things Christian, coupled with a fanatic will to expunge from the public life of the West all reminders that ours was once a Christian civilization and America once a Christian country."

The late Rev. Jerry Falwell added:  “... spiritual Grinches in our nation are accelerating their war against Christmas as never before."

That’s, of course, nonsense.  What’s happening is a burst of common courtesy.

Not everyone believes in or cares about a holiday based on the birth of a baby about 2,000 years ago.  Not even early Christian leaders did.  Lay people wanted the holiday, just as they celebrated the birth of a Roman emperor.  That is why Church leaders opposed it.  They noted there were (and still aren’t) any birthday celebrations for Abraham or Moses.  In their day, only the birthdays of Roman emperors were turned into public festivals, but not birthdays of religious icons.

The Christian forefather eventually lost out to public opinion.  Except for a brief effort by Puritans in the mid-1600s, we’ve been inundated with Christmas ever since.

However, there are other holidays this time of year, including the Jewish Hanukkah and the African-American Kwanzaa.  Hanukkah celebrates a military victory by a ragtag Jewish army initially led Judah Maccabee against the more professional Syrians in 165 BCE and the capture of the Temple.  Kwanzaa was created by an American professor hoping to “reaffirm the communitarian vision and values of African culture and to contribute to its restoration among African peoples in the Diaspora, beginning with Africans in America and expanding to include the world African community, “ according to the holiday’s official website.

Neither resemble Christmas in anyway.  Neither gets the same attention.  In fact, Hanukkah probably would have vanished from the calendar if Christmas hadn’t started up.  How long would anyone celebrate a military victory, especially when it involves the Temple, which disappeared in 70 CE?

Interest in Kwanzaa is fading, especially in recent years as African-Americans increasingly merge with the larger society.

Nevertheless, followers of both holidays shouldn’t have to feel suffocated by Christmas.  No one should, especially in a society where Christianity is increasing losing its grip.  Recently surveys indicate that Americans who are professed Christians has dropped to 72 percent in 2012.  A decade ago, the number was closer to 90 percent.

At the same time, the number of people with no religious affiliation or who are atheists has risen dramatically and now tops 20 percent of the population.

“Happy No Holidays” would probably work for them.  But, even “Happy Holidays” is better than the religion-oriented “Merry Christmas.”

Still, people like Sharon Prudhomme, who owns a Pennsylvania restaurant, don’t get it.  She offers a discount to church-goers who bring in a flyer or bulletin from their church.  She was successfully sued by the Freedom from Religion Foundation (FFRF), an atheist group founded by a once-fundamentalist Christian.  FFRF wants everyone eligible for the discount.

Prudhomme considers the whole dispute ridiculous.  In fact, she insisted, any bulletin from any church would do, even one from a non-Christian facility.

“To me, a mosque is a church; a [Jewish] temple is a church,” she said. “I consider the word to just mean a place where someone goes to honor their religion.”

The word “church” comes from Old English and means “assemble,” which is ecumenical enough.  However, it has become accepted as the term for a Christian building.  That’s why the liberal Unitarians, for example, call their place a "society" and shun the name "church."  The UU Church of West Volusia, based in DeLand, Florida, dropped the word "society" only after finding the children of members were being harassed for not being members of a "church."  Jews call their meeting place a synagogue, which comes from the Greek and means meeting place.  Muslims have a mosque and so on.

Calling anything a church inherently labels it Christian.

Words do matter. So do physical objects.

Wreaths, carols and the like are also clearly and completely Christian.  Even if they are derived from non-Christian sources, including pagan and Jewish, they are exclusive property of one belief.

Everyone has the right to express his religious views.  That’s guaranteed under the U.S. Constitution.  No one, however, has the right to impose that belief on others.  Carols blaring in almost every store, tax dollars spent on Christmas decorations and other Christian-oriented activities are blatant attempts to impose one religion on everyone.

Objecting to that is not an attack on Christmas.  Instead, it represents support for freedom of religion and from religion in a country that never was and is not now Christian.