The Devil Takes on Personal Overtones 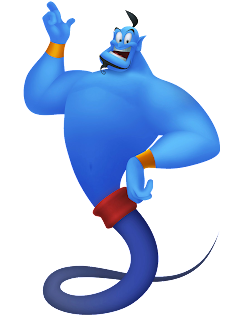 When Iran labeled the United States “the Great Satan,” Americans naturally associated the creature in question with the Christianized devil, the evil creature supposedly responsible for so much pain and anguish in the world.  Actually, in Islam, “satan” is nothing like that.  He’s more of a mischievous imp, trying to mislead faithful Muslims, but with no power.  Allah would not allow that.

Think of the Genie from Disney’s Aladdin to get a better idea.  That’s what the “jinn” in Islamic thinking is.

In reality, the Iranians were scoffing at us, not elevating America to the realm of ultimate evil.

That’s not the first time the poor devil has been misunderstood. After all, the original devil is a creation of Zoroastrians, not Christianity. 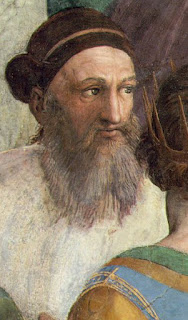 In ancient Persia some 2600 years ago, a man known in Greek as Zarathustra and to us as Zoroaster (left) founded a religion which became the dominant faith of the Persian Empire.  It still endures, although in a very shrunken size.  He believed that the good god, Ahura Mazda, was in a battle with the evil god, Ahriman.  In his belief, the devil actually controlled the world during one epoch; Ahura Mazda ruled in another.  Zoroaster preached that humanity was now in the tumultuous third era to determine whether good or evil would conquer and lead the fourth and final epoch of life.

Humans had to pick a side.  In Zoroastrian thought, we have a choice, free will.  If we choose to join the good side, we will be rewarded after death by going to heaven.  If we tiptoe over to the dark side, our future destination is hell.  Sound familiar?

While the concept is very familiar to Christians, it’s completely alien to Judaism, which engendered Christianity.  Old Testament stories have no evil creature that battles with God.  Instead, there is the evening star (Lucifer) who has fallen, and there’s a strange creature called the “adversary” in the book of Job. The adversary (translated into Satan) thinks that Job is only faithful to God because he is wealthy.  God agrees to erase Job’s material success as well as his wives and children just to see what Job will do.  If anything, God sounds pretty evil in this scenario.  What did Job’s family do wrong to get annihilated? 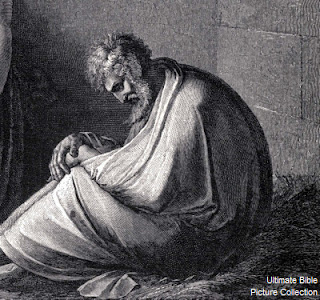 In the end, God tells Job (right) not to question Him.  He’s God; he can do what he wants.  Job gets back everything he lost – albeit with new wives and children.  That’s it.  Satan disappears.  There is no other embodiment of evil in the Jewish religious text.

However, Zoroaster’s idea was ingested entirely by fledgling Christianity.  It provided an acceptable answer for a Christian problem: Jesus was dead, and not much had changed in the world.  Therefore, there must be a devil that was blocking Jesus’ efforts.   As a result, in the Gospel, the devil appears to vainly offer Jesus power over the world.  In Revelation, the two are predicted to fight until Jesus finally prevails.

That battle between good and evil has dominated Western thought for the past 1,900 years.  The devil was everywhere and had to be combated by Christians.  Tertullian, one of the early Church fathers, decided that demonic activity included some interesting activities:  astrology, horse racing, going to theater, putting on makeup, bathing and frequenting bars.

By the Middle Ages, the devil was given a tail, cloven hooves and horns, all borrowed from Pan, the Greek god of the fields.  He was tangible and worshiped by witches.  Those views took awhile to dissipate.

Today, the devil doesn’t carry much weight except in movies like The Exorcist.  After all, he’s been turned into a sports’ mascot – the Duke Blue Devils and the New Jersey Devils (right) come to mind.  He still gets blamed for lots of stuff, but the mainline Christian view toward the devil is losing support.

By 2009, however, according to a Barna Group study, the devil had started to melt away.

Four out of ten Christians (40 percent) strongly agreed that Satan “is not a living being but is a symbol of evil.” An additional two out of ten Christians (19 percent) said they “agree somewhat” with that perspective.  A minority of Christians indicated that they believe Satan is real by disagreeing with the statement: one-quarter (26 percent) disagreed strongly and about one-tenth (9 percent) disagreed somewhat. The remaining 8 percent were not sure what they believe about the existence of Satan.

The numbers probably have sagged a little more since then.  After all, the devil doesn’t really have to do much.  Climate Change is obviously a dangerous situation created by humans.  The existence of meteors aimed at Earth hardly fits into the devil’s purview.  Neither does the possible Republican presidential nomination of a right-wing extremist like Rick Santorum, a serial womanizer with severe ethic problems like Newt Gingrich or an elitist flip-flopper like Mitt Romney.

They are all obviously naturally occurring disasters without the need for a devil.

Iran will just have to come up with a new epithet.  After all, most of us understand who the devil really is – ourselves.